Sabbath versus circumcision – which is greater?

The Feriae of Pope Sylvester I 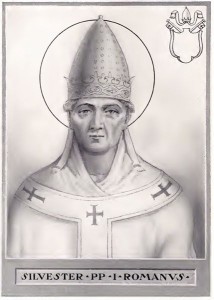 Pope Sylvester and his “feriae”

Adventists quote a dubious medieval source that describes something Pope Sylvester may or may not have done centuries earlier. They usually don’t understand what it says. The source says this:

Pope Sylvester first among the Romans ordered that the names of the days [of the week], which they previously called after the name of their gods, that is, [the day] of the Sun, [the day] of the Moon, [the day] of Mars, [the day] of Mercury, [the day] of Jupiter, [the day] of Venus, [the day] of Saturn, they should call feriae thereafter, that is the first feria, the second feria, the third feria, the fourth feria, the fifth feria, the sixth feria, because that in the beginning of Genesis it is written that God said concerning each day: on the first, “Let there be light:; on the second, “Let there be a firmament”; on the third, “Let the earth bring forth verdure”; etc. But he [Sylvester] ordered [them] to call the Sabbath by the ancient term of the law, [to call] the first feria the “Lord’s day,” because on it the Lord rose [from the dead], Moreover, the same pope decreed that the rest of the Sabbath should be transferred rather to the Lord’s day [Sunday], in order that on that day we should rest from worldly works for the praise of God.
— Rabanus Maurus, De Clericorum Institutione, book 2, chapter 46 [via “Exactly Which Pope Changed The Sabbath To Sunday?” by Michael Scheifler, with his modifications; see Pope Sylvester I – who changed the Sabbath?]

Note that this was written a good 400 years after the time of Pope Sylvester I, and it’s historical accuracy is questioned by some. Nonetheless, that makes no difference to the dishonest Adventist claim being refuted.

Often you’ll then hear (or see) the dishonest Adventists harp on about this amazing word – “feriae” – as if it proves something. It’s actually hilarious to see this sometimes. The more sober Adventists will simply show that the pope used the name “Lord’s Day” for the first day of the week, supposedly proving that THIS is the pope who changed the sabbath to Sunday.

What really happened? Well, it’s uncertain whether or not this actually did happen. But let’s assume it did happen. What Pope Sylvester saw around him was a 7-day week with days named after pagan gods or planets. Sunday, Monday, Tuesday, Wednesday, Thursday, Friday, Saturday in modern English. In Latin: Dies Solis, dies Lunae, dies Martis, dies Mercurii, dies Iovis, dies Veneris, dies Saturni.

He supposedly decided that this was unsuitable for Christian usage, and proposed that they be named according to their religious significance for the two weekend days (Dominica and Sabbatum), and simply “weekday 2” to “weekday 6” for the weekdays, or “feria secunda” to “feria sexta” in Latin. 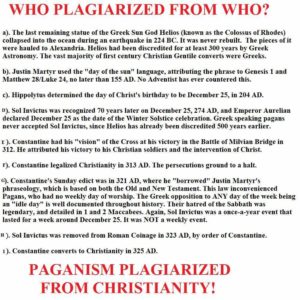 Who plagiarised from whom?

By this time, the term “Lord’s Day” was well established in Latin and Greek as the name for Sunday in Christian circles. In Greek, but not Latin, the day before the sabbath retained the biblical term “Παρασκευη“, or “Preparation day” in preparation for the sabbath (see John 19:42).

But you’ll still find the Adventist who doesn’t comprehend what is being described, and blabs on about how the pope “established the feriae” as if it means anything intelligent.

Before we move on, it’s worth noting that, for the most part, this system of naming days never really took hold. A few Romance languages today use it. Also worth noting is that in most Romance languages not using pagan names for days, the name of the 7th day of the week is a derived term from the Latin “Sabbatum” – and speakers of these languages aren’t fooled by the Adventist claim that the sabbath was changed to Sunday – their own language calls the 7th day of the week “sabbath“.

See the series on the pope who never changed the sabbath to Sunday:

This post comes from a larger post on Adventist dishonesty – Dishonesty in Seventh-day Adventism, Part 2 – Catholicism – and deserves its own page in the series on the Pope who didn’t change the sabbath.