Coeliac disease and the Eucharist

The idea that certain races of non-white people are derived from mating between animals and humans won’t go down well in today’s society.  Never mind that it’s rubbish.  Which is one reason why you won’t hear it taught from Adventist pulpits, or hear it preached in the prophecy seminars you later discovery to be Adventist-run.

This was written by Ellen White (no pun intended on her name) – the Adventist prophetess, whose inspiration is of the same degree as the inspiration of the Bible [“We do not believe that the quality or degree of inspiration in the writings of Ellen White is different from that of Scripture.”]

But if there was one sin above another which called for the destruction of the race by the flood, it was the base crime of amalgamation of man and beast which defaced the image of God, and caused confusion everywhere.
– Ellen White, Spiritual Gifts, Vol. 3, p. 64.

Every species of animal which God had created were preserved in the ark. The confused species which God did not create, which were the result of amalgamation, were destroyed by the flood. Since the flood there has been amalgamation of man and beast, as may be seen in the almost endless varieties of species of animals, and in certain races of men.
– Ellen White, Spiritual Gifts, Vol. 3, p. 75. 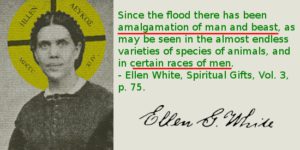 Although modern Adventists try to deny that she taught this, it was taught by some during her time by others, and the teaching was defended by some of her contemporaries, such as Uriah Smith, with her knowledge.  Her husband even gave Smith’s book a glowing review:

The Association has just published a pamphlet entitled, “The Visions of Mrs. E.G. White, A Manifestation of Spiritual Gifts According to the Scriptures.” It is written by the editor of the Review. While carefully reading the manuscript, I felt grateful to God that our people could have this able defense of those views they so much love and prize, which others despise and oppose.
– James White, Review, Aug. 15, 1868.

…that crosses between men and animals had created a no-man’s-land between man and beast, populated by gorillas, chimpanzees, wild bushmen of Africa, Patagonians, and Hottentots.
– Gordon Shigley, “Amalgamation of Man and Beast: What Did Ellen White Mean?”, Spectrum, vol. 12, no. 4, p. 13.

… the sons of men in those days took from the cattle of the earth, the beasts of the field and the fowls of the air, and taught the mixture of animals of one species with the other.
– Jasher 4:18. [Evidence that Ellen White used this as a source.]

“Since the flood there has been amalgamation of man and beast, as may be seen in the almost endless varieties of species of animals, and in certain races of men.” This view was given for the purpose of illustrating the deep corruption and crime into which the race fell, even within a few years after the flood that signal manifestation of God’s wrath against human wickedness. There was amalgamation; and the effect is still visible in certain races of men.” Mark, those excepting the animals upon whom the effects of this work are visible, are called by the vision, “men.” Now we have ever supposed that anybody that was called a man, was considered a human being. The vision speaks of all these classes as races of men; yet in the face of this plain declaration, they foolishly assert that the visions teach that some men are not human beings! But does any one deny the general statement contained in the extract given above? They do not. If they did, they could easily be silenced by a reference to such cases as the wild Bushmen of Africa, some tribes of the Hottentots, and perhaps the Digger Indians of our own country, &c. Moreover, naturalists affirm that the line of demarkation between the human and animal races is lost in confusion. It is impossible, as they affirm, to tell just where the human ends and the animal begins. Can we suppose that this was so ordained of God in the beginning? Rather has not sin marred the boundaries of these two kingdoms?
– Uriah Smith, The Visions of Mrs. E. G. White, A Manifestation of Spiritual gifts According to the Scripture, pp. 103-4

Adventism has offered all sorts of ideas that this could refer to – genetic engineering [before and since the flood, before now???], interracial marriage [enough of those in the Bible, e.g. Moses, to know that it’s okay] or marriage between godly and ungodly people [how does that alter a race, and where do the animals come in?] – but the evidence is against these excuses.

Sad.  But truly good that these inspired words of Ellen White are not taken seriously by her followers.

More on this racist teaching at the page where I found this horrible stuff.