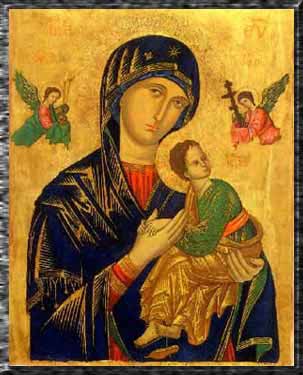 Where the name Θεοτόκος comes from

In 431 AD, the Council of Ephesus debated the teaching that Jesus was not truly God, and that God the Son was not truly man. The Patriarch of Constantinople, Nestorius, had taught that Jesus was two persons with two natures – a divine person with a divine nature, and a separate human person with a human nature. At the Council he said, “I can never allow that a child of three months old was God.” Opposing him were bishop St Memnon of Ephesus and Pope St Cyril the Great of Alexandria, supported by Pope St Celestine of Rome, who died before the council began. The Nestorian teaching was formally condemned at this Council, and the official teaching of the Catholic Church, the Eastern Orthodox Churches, and most Protestants today is that Jesus is one person, with two natures – a human nature and a divine nature.

To express that truth, the Council of Ephesus stated that Mary was truly the Mother of God. Nestorianism taught that Mary gave birth to only a man, and not the Logos, God the Son, and that God the Son merely dwelt within Jesus the man. It taught that the human and divine natures of Christ were each found in two separate persons, and the person born to Mary had only a human nature, and was not the Logos. They called Mary the Christotokos (Χριστοτόκος) – Mother of Christ, and they rejected the idea that she was Theotokos, Mother of God.

The Council taught that the person to whom Mary gave birth was truly God, not merely a man who was later indwelled by God the Son.

Many today get confused by the term “Mother of God” and think that it means Catholics teach that Mary is the mother of the Godhead – but that is not the case. It is not the Godhead, but the Incarnate Logos, of which Mary is mother. The term simply teaches that the Word himself was born of Mary, something most Christians – Catholic, Orthodox, and Protestant – believe. In the words of St Athanasius of Alexandria, “As the flesh was born of Mary, the Mother of God, so we say that he, the Word, was himself born of Mary” (Discourses against the Arians, Discourse iii, section 33, see also iii.14,29, iv.32).

The definition of the Council of Chalcedon states:

So, following the saintly fathers, we all with one voice teach the confession of one and the same Son, our Lord Jesus Christ: the same perfect in divinity and perfect in humanity, the same truly God and truly man, of a rational soul and a body; consubstantial with the Father as regards his divinity, and the same consubstantial with us as regards his humanity; like us in all respects except for sin; begotten before the ages from the Father as regards his divinity, and in the last days the same for us and for our salvation from Mary, the virgin God-bearer as regards his humanity; one and the same Christ, Son, Lord, only-begotten, acknowledged in two natures which undergo no confusion, no change, no division, no separation; at no point was the difference between the natures taken away through the union, but rather the property of both natures is preserved and comes together into a single person and a single subsistent being; he is not parted or divided into two persons, but is one and the same only-begotten Son, God, Word, Lord Jesus Christ, just as the prophets taught from the beginning about him, and as the Lord Jesus Christ himself instructed us, and as the creed of the fathers handed it down to us.

Most modern Nestorians live in Iraq today, and their Patriarch resides in the USA.

The word Theotokos comes from the Greek Θεός = God, and τόκος = childbirth. Therefore the word is translated as “God-bearer” – or more eloquently, “she who bore God in her womb” or “she who birthed God into the world.” This makes the real meaning behind the name “Mother of God” a lot less confusing and controversial.

In a non-biological sense, every Christian is also a theotokos, a God-bearer. All Marian titles teach us something about Christ, because Mary points us to Christ (“His mother saith unto the servants, ‘Whatsoever he saith unto you, do it.'” John 2:5, KJV) and Jesus Christ is the focus of our faith.

But it also teaches us about ourselves – Catholics regard Mary as the prototype follower of Christ. Her virginity represents the purity the Bible tells us to live up to. Her immaculate conception shows us our final state when our fallen nature is perfected by Christ. Her assumption into heaven depicts our future glory when our bodies and souls are united in heaven and spent eternity with God. And her role as God-bearer shows us in an intimate way how we are to personally bring Christ into the world for others. Jesus is the light of the world, and we are the bearers of that light, and he tells us not to hide that light (Matt 5:15.) We are ambassadors for Christ (2 Corinthians 5:20.)

We are truly theotokoi (θεοτόκοι) because we bring Christ into the world to be experienced by others!

What Catholics Believe – Mary, the Virgin Mother of God … by Stephen Korsman

The Council of Chalcedon – Wikipedia

The Council Of Ephesus – Wikipedia

Was Jesus the son of Mary? … by Stephen Korsman

More on the Mother of God … by Stephen Korsman

Originally written on the Eve of the Immaculate Conception, 7 Dec 2003

Introduction My views on Adventism Credits Mary, the Theotokos Blog rules and ToS Contact About me Copyright