This will be a 3-part series, dealing with the following issues:

The Adventist question is left largely unanswered.  If we are meant to obey the 10 Commandments, as they were written by the finger of God on stone tablets and given to Moses, then surely we need to keep the Sabbath the way it was intended in that set of laws?  If the 10 Commandments are binding on Christians, then the Adventists argument is a problematic one.  Considering that it is clear from the Bible and from history that we do not need to keep the 7th day Sabbath, their argument must be flawed.  There are several very good attempts to answer it that I’ve come across, so it’s not as if the Adventist argument cannot be refuted.  I will present what I believe is the most logical.

Adventists and other Sabbatarians constitute a very small portion of Christianity.  Most of the time someone hears “Must we keep the 10 Commandments?” it’s in the context of “Do we have to follow any sort of moral code?”  In that context, the answer is clearly YES.  And without a doubt, the 10 Commandments are the best known moral code in existence.

Nearly all Christian denominations share a belief in the importance of the 10 Commandments as a code to guide our morals.  Certainly the Catholic Church does (emphasis mine throughout this post):

Since they express man’s fundamental duties towards God and towards his neighbor, the Ten Commandments reveal, in their primordial content, grave obligations. They are fundamentally immutable, and they oblige always and everywhere. No one can dispense from them. The Ten Commandments are engraved by God in the human heart.
– Catechism of the Catholic Church, paragraph 2072

In a world where 99% of the time we are concerned with what is and isn’t moral, statements, like CCC 2072 above, from all Christian denominations make perfect sense.  And they are right – the 10 Commandments are VERY applicable to Christians.

But there is a catch.  A technicality often missed today.

The status of the Sabbath in Christianity can be determined as follows:

1. The Sabbath commandment is one of the 10 Commandments.

2. The 10 Commandments are the words of the Old Covenant

What is the biblical evidence for this idea?

Deut 4:13 (KJV): And he declared unto you his covenant, which he commanded you to perform, even ten commandments; and he wrote them upon two tables of stone.

Deut 5:1-3 (KJV): And Moses called all Israel, and said unto them, Hear, O Israel, the statutes and judgments which I speak in your ears this day, that ye may learn them, and keep, and do them.  The LORD our God made a covenant with us in Horeb.  The LORD made not this covenant with our fathers, but with us, even us, who are all of us here alive this day.  (The 10 Commandments are then spoken by Moses)

Deut 9:9 (KJV): When I was gone up into the mount to receive the tables of stone, even the tables of the covenant which the LORD made with you, then I abode in the mount forty days and forty nights, I neither did eat bread nor drink water

Exod 20:1 (KJV): And God spake all these words, saying (This is Moses speaking; the 10 Commandments are then spoken by Moses after being given them by God)

Exod 34:28 (KJV): And he was there with the LORD forty days and forty nights; he did neither eat bread, nor drink water. And he wrote upon the tables the words of the covenant, the ten commandments.

For those who think that the 10 Commandments being written in stone makes them permanent, see what Moses did in Exodus 32:19:

Exodus 32:19 (KJV): And it came to pass, as soon as he came nigh unto the camp, that he saw the calf, and the dancing: and Moses’ anger waxed hot, and he cast the tables out of his hands, and brake them beneath the mount.

If that is not symbolic of the eventual abolishing of the 10 Commandments, it’s at least a sign that being written in stone doesn’t mean something is permanent.

1 Kings 8:9 (KJV): There was nothing in the ark save the two tables of stone, which Moses put there at Horeb, when the LORD made a covenant with the children of Israel, when they came out of the land of Egypt

1 Kings 8:21 (KJV): And I have set there a place for the ark, wherein is the covenant of the LORD, which he made with our fathers, when he brought them out of the land of Egypt.

2 Chronicles 6:11 (KJV): And in it have I put the ark, wherein is the covenant of the LORD, that he made with the children of Israel.

The tables of the covenant were certainly inside, but there is debate amongst scholars as to the discrepancy regarding the manna and Aaron’s rod.  This is not the issue here, and the reader is referred to John Gill’s Expositor for a good explanation of this.

3. The Sabbath was the sign of the Old Covenant 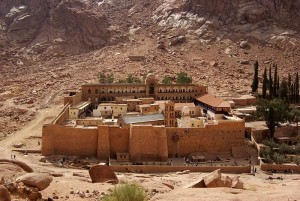 Exod 31:12-13 (KJV): And the LORD spoke unto Moses, saying, Speak thou also unto the children of Israel, saying, Verily my sabbaths ye shall keep: for it is a sign between me and you throughout your generations; that ye may know that I am the LORD that doth sanctify you.

Exod 31:16-18 (KJV): Wherefore the children of Israel shall keep the sabbath, to observe the sabbath throughout their generations, for a perpetual covenant*. It is a sign between me and the children of Israel forever*: for in six days the LORD made heaven and earth, and on the seventh day he rested, and was refreshed. And he gave unto Moses, when he had made an end of communing with him upon mount Sinai, two tables of testimony, tables of stone, written with the finger of God.
*See the full post for discussion of the covenant being “perpetual”.

Deut 5:1-3 (KJV): And Moses called all Israel, and said unto them, Hear, O Israel, the statutes and judgments which I speak in your ears this day, that ye may learn them, and keep, and do them. The LORD our God made a covenant with us in Horeb. The LORD made not this covenant with our fathers, but with us, even us, who are all of us here alive this day.

Neh 9:13-14 (KJV): Thou camest down also upon mount Sinai, and spakest with them [Israel] from heaven, and gavest them right judgments, and true laws, good statutes and commandments: And madest known unto them thy holy sabbath, and commandedst them precepts, statutes, and laws, by the hand of Moses thy servant

Ezek 20:12 (KJV): Moreover also I gave them [Israel] my sabbaths, to be a sign between me and them, that they might know that I am the LORD that sanctify them.