Then there appears against the sky a hand holding two tables of stone folded together. Says the prophet, “The heavens shall declare His righteousness; for God is judge himself.” [Psalm 50:6.] That holy law, God’s righteousness, that amid thunder and flame was proclaimed from Sinai as the guide of life, is now revealed to men as the rule of judgment. The hand opens the tables, and there are seen the precepts of the decalogue …
– The Great Controversy 1888, p 639

The Lord gave me the following view in 1847, while the brethren were assembled on the Sabbath, at Topsham, Maine. … In the ark was the golden pot of manna, Aaron’s rod that budded, and the tables of stone which folded together like a book. Jesus opened them, and I saw the ten commandments written on them with the finger of God. On one table were four, and on the other six. The four on the first table shone brighter than the other six. But the fourth, the Sabbath commandment, shone above them all; for the Sabbath was set apart to be kept in honor of God’s holy name.
– Early Writings, pp 32-33

These descriptions (emphasis mine), given to Ellen White in a vision, prove that the vision was NOT given by God. If it was not given by God, who was it that gave Ellen this vision? And what was their agenda when highlighting the sabbath? And if Ellen was getting visions from someone other than God, can she be considered a true prophet of God?

Proof that the vision was not from God?

That sounds pretty much like many pictures of the 10 commandments, doesn’t it? But are those pictures accurate?

If God had given Ellen her vision, what would the tablets with the commandments have looked like in the vision?

In a vision given by God, the 10 commandments would have covered BOTH the FRONT and the BACK of the two tablets. If the real tablets on which the 10 commandments were written were folded like a book, 25% of the writing would be visible on the one side of the closed set, 25% would be visible on the other side of the closed set, and the other 50% would become visible when they were opened.

That is what the Bible says. That is what God would have shown in a real vision from God. That is not what Ellen saw in her vision.

What does the Bible say?

Exodus 32:15 (KJV) – And Moses turned, and went down from the mount, and the two tables of the testimony were in his hand: the tables were written on both their sides; on the one side and on the other were they written.

Exodus 32:15 (NIV) – Moses turned and went down the mountain with the two tablets of the covenant law in his hands. They were inscribed on both sides, front and back.

Even the Adventist Clear Word gets it right: “Then Moses went down the mountain carrying the two tablets of stone which had been written on, both front and back.” 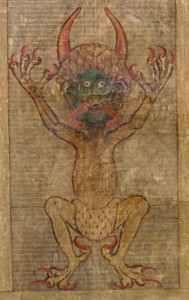 Where did Ellen’s vision come from?

Why was the sabbath commandment highlighted?

Is Ellen a true prophet?