God reaching out through space and time

Guest post at the blog Reinventing the Adventist Wheel.

I’ve been invited to be an occasional contributor to this blog, as a Catholic who has a website/blog on Adventism, to learn more about Adventism, and help both sides understand each other better. 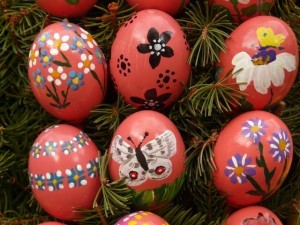 This is my first post, and since we recently celebrated Easter, I thought some of the symbolism of Easter would be a good way to introduce the way Catholicism views symbols and sacramentals, something often looked at strangely by non-Catholic Christians.

I’ll start off with a New Testament example familiar to most Christians.

Acts 19:12 (KJV) So that from his body were brought unto the sick handkerchiefs or aprons, and the diseases departed from them, and the evil spirits went out of them.

What happened here? In modern society, such acts would be viewed as superstitious. They’d be viewed as suspiciously Catholic by many. Yet in many Protestant denominations, anointed handkerchiefs or cloths are passed around, sometimes sent from specific ministries to those who request them. To what end?

Num 21:8 (KJV) And the LORD said unto Moses, Make thee a fiery serpent, and set it upon a pole: and it shall come to pass, that every one that is bitten, when he looketh upon it, shall live.

Here we have another case of a physical symbol used by God for the purpose of healing. Was there magical power in these items? If we could get them here today, would they work for curing snake bites and other ailments?

Or were they physical signs through which God worked for those who had faith? Or were they merely symbols that were not necessary … surely those who had faith, and didn’t think it was necessary to look at the snake, were healed of their snake bite? Did Moses tell them to have faith, whether they looked at the snake or not, and they’d be healed? Did Paul tell the people to have faith and not worry about handkerchiefs? Or did he permit them to use them, in order to bring God’s healing through the symbols of that faith?

It’s fairly clear that in both Old Testament and New Testament times, it was believed that God worked through items that held religious significance. A snake he told Moses to make, the bones of Elisha, the hem of Jesus’ clothes, and handkerchiefs from Paul. 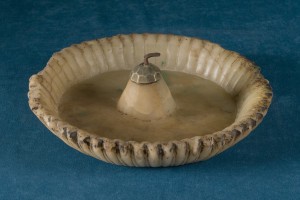 It’s not so much a question of whether God works this way or not; and why God works this way is another theological matter I won’t delve into much, apart from saying that the Bible doesn’t support the Gnostic notion that matter is evil – the Incarnation alone, which they denied, shows us that what God made was good, and came to us in physical form. The real question, for this discussion, is how God works through physical symbols. Magic? Faith, which without them would suffice? Or is there a point to the symbols? Can God’s grace come through physical objects that are symbols of an aspect of our faith?

If someone wears a cross around their neck, and touches it when they think of God and pray, does God work through that cross for them? Or is it pointless, irrelevant to God, something he doesn’t use to bring us closer to him?

If someone sees a beautiful wild flower while hiking along a river – is that a sign of God’s grace? Is it an offer of grace, moving us to thank him for the creation? Or is it not God’s way of bringing us closer to him, and merely something nice, but not relevant to our faith, which we shouldn’t express in physical ways?

Catholics believe that God works through physical expressions of our faith. There is no magical power involved, no incantation that makes appreciation for one flower more powerful than appreciation for another flower, no special type of cloth that makes Paul’s handkerchiefs more potent than John’s, no metallic properties that allows a gold cross to make prayer more effective than a steel or wooden cross. Yes, there may be a blessing whereby we ask God to allow the cross, or handkerchief, to be used for his glory, and be a reminder to us of his grace. But it’s not magic. It’s real. We believe that, when we use something like a cross or a handkerchief – or a flower – as an external symbol of our faith, God uses that to come to us in a very real way. That object, as a symbol of our faith, as a reminder of God, becomes a door to God, through which he pours out his grace.

We don’t deny that faith without the symbols also brings that grace. But we acknowledge that faith can be enriched when it is expressed in those symbols. Most Protestant denominations acknowledge, to some extent, the significance of laying on of hands for the purposes of ordination and blessing. Adventists do this too. Few people deny that there is nothing special about hands that allow them to emit the power of the Holy Spirit – the only place I’ve found that idea is in various New Age concepts. But the practice remains a powerful sign, one most people who practice it believe God works through. 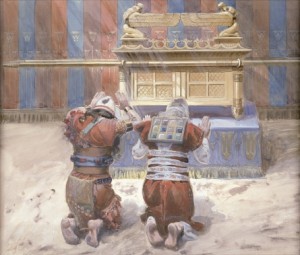 Moses and Joshua in the Tabernacle

The Catholic word for these things is sacramentals. It sounds scary to those not familiar with Catholic-speak. It comes from the same Latin root as sacred, which also means holy – and as any good Bible dictionary will tell you, holy means “set apart” – set apart, dedicated, or consecrated for the glorification of God, in this case, and not, as some might think, sacred in some intrinsic way. The Hebrew equivalent of holy would be qodesh (Strong’s 6944) and the equivalent of consecrate or sanctify would be qadash (Strong’s H6942.) We’ve lost that sense of something being set apart in English, and even hagios in Greek.

Sacramentals include the cross, the crucifix, holy oil, baptismal water, salt, palms used just before Easter, and so forth. Some of these are shared by Protestants, some not, and few Protestants call them sacramentals. But the understanding is there, and to some extent a common theology, but not always a common practical application of that theology.

I think that most Adventists, if they put aside any suspicion of things Catholic, will recognise these principles in their own expression of their faith, and in the expression of faith in the Bible. The extent to which we practice this aspect of our faith varies, and the names we give it vary, but I do believe that there is some common ground here.

A final question that I’ll get round to answering in the future – does God’s grace come to us only when we ask for it? Or does God give it, and all we do is accept it or reject it? Is the reception of grace our work, or God’s?