If the BOSS won’t give you water, you agree to die 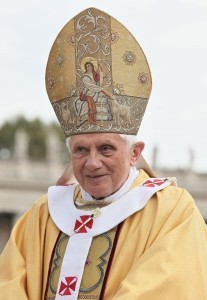 Recently, the Vatican’s International Theological Commission allegedly released a document indicating that Limbo, the place where unbaptised babies go after death, may be restrictive, and that there are good reasons to hope that they might be in heaven.  (Document here on the Vatican website.)

This has caused some consternation in some corners of the Church.  But then so did the concept that God could understand languages other than Latin.  Some cling to the idea that Limbo is a formal part of the Tradition of the Church, when really it isn’t, as can be seen by looking at the hopes and prayers of the saints throughout the centuries.  It certainly has never been defined as such, and I’ve only seen claims regarding texts explained better elsewhere.

So I took a look at some of what HH Pope Benedict XVI said prior to his becoming pope.

This is a very wise man.  I’ve always been impressed by him, and this leads me to believe that he thinks at a level far above most.  He’s orthodox, very much so, in his theology, and he’s not going to go around approving documents that are not orthodox in their teachings.

Some say that he’s ignoring tradition – no he’s not.  He has it very well understood.  He knows what the history of limbo is, and knows where it can and can’t go.  Think again.

Some say that the idea that the unbaptised can go to heaven detracts from the importance of the teaching that salvation comes through Christ alone.  In reality, that is far from the truth.

HH Benedict XVI has shown that he can, without betraying the historical truths contained in the Apostolic faith taught by the Catholic Church, preach God’s love and mercy by raising our understanding of those truths beyond the rigid interpretations required by a need for defensiveness and protectiveness, as is often the case in apologetics, canon law, and other branches of theology.

I’m hoping for more incredible insights from one of the most brilliant minds God has given to lead the Church.  Hopefully more will be said, from him directly, on this issue. God is not the abortionist of the soul.

Limbo In Limbo? … by Jimmy Akin

Posted by Jared Olar on April 22, 2007, 9:14 pm
The Catholic doctrine that all who die in original sin go to hell was infallibly defined by the Second Council of Lyons in 1274:

“The souls of those who die in mortal sin or with only original sin soon go down into hell, but there they receive different punishments.”

We know that baptism remits original sin, and that ordinarily those who die without baptism would die in a state of unremitted original sin. We also know that God has extraordinary means of remitting original sin for adults, apart from baptism. So the only question remaining is whether or not God ever extraordinarily remits original sin in the case of unbaptised infants. The Church knows of no such means, and although this new (non-binding, non-magisterial) study paper from the International Theological Commission argues that we have reason to hope that there is such a means, it still admits that we know of no such means. Like it or not, that leaves Limbo on the table as a viable option. It is conceivable that someday the Church could issue a formal definition either affirmimg Limbus Puerorum as a doctrine, or definitively excluding it. But for now the question remains open. (By the way, as late as the 1950s, the Holy Office condemned as unsound and “without foundation” the proposition that all babies who die without baptism go to heaven.)

And Fr. Brian Harrison’s “Could Limbo Be ‘Abolished’?“

Posted by stephen on April 22, 2007, 10:24 pm
I should add: such infants, by the grace of God, if they enter heaven, would have their original sin removed. I agree – no sin can enter heaven. And quite likely, those infants are given the opportunity to choose between God’s love and rejection of it. That is what all of us get to do. None of which happens apart from Christ’s sacrifice.

No, it comes from Lyons. Florence reiterated it, but it first appears in a magisterial document of the Church in 1274. I found the quote from the Second Council of Lyons on page 349 of “The Church Teaches — Documents of the Church in English Translation” (1955).

“Considering that Florence was a council attempting union between East and West, such a reference to the teaching of original sin, which the Western Catholics, but not Eastern Catholics or Orthodox, accept, makes it strange.”

Anyway I see nothing strange about a reference to original sin from a council attempting to reunite the Eastern Orthodox with the Church. Reunion couldn’t be possible unless the Orthodox can come to understand and accept the Catholic doctrine of original sin, and it would be no more strange for a reunion council to address original sin than it would be for it to address the Filioque or Papal Infallibility or the Immaculate Conception.

“Pope Clement IV included this statement in the profession of faith that he sent to Emperor Michael Palaeologus. In The Christian Faith (Neuner-Dupuis), we read about this profession of faith that it ‘was not written at the Council, nor was it accepted by the Greeks as a basis for a doctrinal agreement with the Latins. It was neither promulgated, nor even discussed by the Council Fathers, but simply read from a letter sent by the Byzantine emperor’ (p. 17). The Fulgentius citation was, however, subsequently included in the Florentine decree Laetentus caeli.”

That basically agrees with “The Church Teaches,” which says of the document in which the quote [“The souls of those who die in mortal sin or with only original sin soon go down into hell, but there they receive different punishments”] appears:

“The emperor in the East, Michael Palaeologus, subscribed to this creed through his ambassadors at Lyons.”

Thus, although it may not have been written at the Council, it was formally received and ratified at and through the Council. It’s misleading to say the creed was not promulgated by the Council, since the Fathers read it aloud and accepted it. (It’s also misleading to say it wasn’t the basis for a doctrinal agreement with the Latin Church, since it is itself the Eastern Emperor’s statement of doctrinal agreement with the Latin Church. Not that it matters, since this attempt to reunite the East with the rest of Christendom was a failure.) But one cannot dismiss or downplay the statement from this creed from the Second Council of Lyons, since it obviously is at the very least a declaration of the authentic magisterium. The fact that it was repeated in a magisteral document of Pope John XXII in 1321 shows that by then it had become at the very least a declaration of the infallible ordinary magisterium. Its promulgation by the Oecumenical Council of Florence in 1439 raised it to the level of the infallible extraordinary magisterium. So, perhaps one could argue that at Lyons in 1274 the statement was not a conciliar definition, and hence not infallible at that time. But after 1439 one could no longer make such an argument.

“Zadok the Roman” has some helpful comments on this subject here: And you think English-language religion reporting is bad?

Posted by stephen on April 23, 2007, 10:37 am
I’ve checked a number of places, and while 2nd Lyon is mentioned as having said that, none of the texts available online that I can find contain it.

It is usually simply be a case of the same teaching, but the Eastern Christians not using Western reasoning for their explanations (and they don’t usually try to explain anyway) of the fall of man, Mary’s sinlessness, and the Real Presence. Instead of Purgatory, the Byzantines have the Final Deification, and the Pope and Patriarch agreed that there would be no debate – the essential aspects of the teaching are shared. Similarly, by the same agreement, the Byzantine Catholics are exempt from the Filioque, while acknowledging that the reason for disunity was due to not wanting to understand each other. In fact, in 1995 John Paul II welcomed a document from the Pontifical Council for Promoting Christian Unity stating that the Creed without the Filioque was the normative form, as it was shared by all Catholic Churches, not just the Latin Rite.

The Immaculate Conception: problematic because the decree is expressed in terms of the absence [negative declaration] of original sin as understood by the West who formulated the definition, whereas the East expresses their view in a positive declaration about purity and sinlessness. But, since both share the same faith, how it is defined is not considered important. Mary was never considered to have the guilt of Adam’s sin (i.e. West: she didn’t have original sin; East: no such concept), but she did die (West: being human; East: the effect of original sin = death.) (The West considers belief in her death to be optional, the East not.) So Mary never sinned, she never had the guilt of Adam’s sin – both sides agree … but express it differently, and at times in ways that may appear to be contradictory, because the two sides mean two competely different things and talk past each other.

Some Eastern Catholic Churches have been more westernised than others. But some have not, and the CCC in Greek takes the original sin issue into account, using a neutral term – ancestral sin – that is acceptable to both. In most cases of Catholic/Orthodox agreements, it is agreed that we share one faith expressed differently. So the one faith might in the West be expressed as original sin, or purgatory, or transubstantiation, while in the East it may be different. Beneath any declaration of what the faith is, is a concept that could be explained in other words and using other philosophical constructs without error.

In short, the East is more patristic, and the West more scholastic, but some argue that the West is working to move more Eastwards.

http://www.east2west.org/ is a good site, run by a Byzantine Catholic from EWTN.

I think a lot of statements do need interpretation in light of what they were intending to address. But I think we’re in agreement on the baby issue … and for most things, we simply can’t see to the other side of death to find out.