The Latin Mass in Africa – contacts 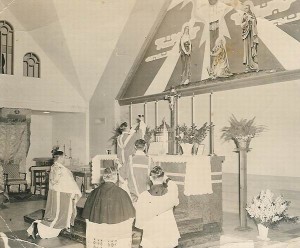 Over at LumenGentleman’s site, the Summorum Pontificum Contact Database has been set up.

So far, only 3 from South Africa – one from Onderstepoort, the country’s veterinary centre, and two from the Eastern Cape – me and someone from Grahamstown. Quite far, and I’d hope for something closer, but I’ve never visited Grahamstown, and I might if they have the Latin Mass in its extraordinary form.

I went to Mass here in Umtata tonight. This time they said the creed. Communion was via the “take and dip” method, with no extraordinary minister of the Eucharist assisting – the chalice was on the altar, the priest down below. Interestingly, half the congregation didn’t self-communicate. And at least they said the creed this time.

If you’re from South Africa, and want to see more use of the 1500 year old liturgy, the one used at Vatican II, also known as the Tridentine Mass, the old Latin Mass, the Liturgy of Pope Pius V, celebrated according to the missal published by Blessed John XXIII, then go and register as a contact.

[Links all no longer exist.]

Posted by Norman on August 7, 2007, 3:49 pm
I like your blog….and thanks for the notification about the lumengentleman ititiative. I see there are now 6 South Africans signed up.

Have you seen http://www.sanctamissa.org/EN/index.html ? This will be especially useful to priests who may wish to take up the challenge.