Adventism seems to like sticking up anti-Catholic billboards.  This time it was an Adventist spin-off denomination, Eternal Gospel Church.  This was around the beginning of February, and commented on at Ad Majorem Dei Gloriam. 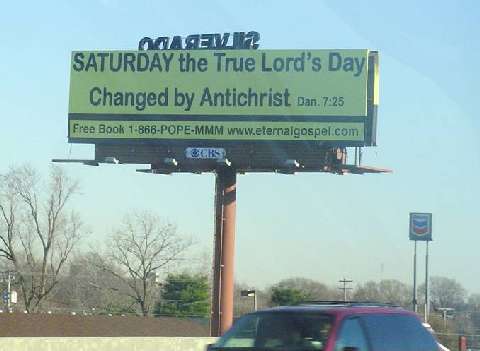 Interestingly, on their website, they list as an upcoming speaker Jan Marcussen, someone I had contact with some years ago.  His newsletter was one of the most rabid I’ve ever come across, grossly misrepresenting anything not in agreement with them.  I wrote them a letter, and it made it into the newsletter – completely distorted, made to say things I never wrote.  This was one of the first contacts I had with Adventism.  It looks like nothing has changed, at least as far as this group goes.  Probably why mainstream Adventism wants nothing to do with them.