Seventh-day Adventists think that in the end times, they will be persecuted by Sunday-keeping Christians, and by Catholics in particular.  Why?  Because they think observing the weekly sabbath according to some, but not all, of the Old Testament sabbath laws, will be the test commandment, the test that shows they are the true followers of God. 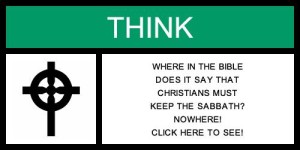 Where in the Bible?

Why is this nonsense?

We can divide the problem into several sub-problems – resting, worship, work, and whether these are enforced by law or not.

“The light given me by the Lord at a time when we were expecting just such a crisis as you seem to be approaching, was that when the people were moved by a power from beneath to enforce Sunday observance, Seventh-day Adventists were to show their wisdom by refraining from their ordinary work on that day, devoting it to missionary effort.”
– Testimonies for the Church, vol. 9, Page 232