Bacchiocchi – images of his diploma and medal 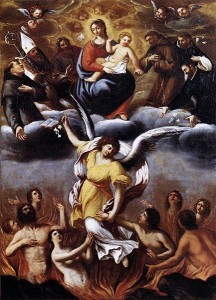 An Angel Frees the Souls of Purgatory – Ludovico Carracci

Father Tavard showed how purgatory has been understood by Catholics as both a place of punishment and a state of cleansing, perhaps even momentary, at the time of death. Among the mystics, the latter image has greater prominence inasmuch as final purgation means an encounter with the “fire” of divine love which removes the effects of sin on the human person.

Lutheran and Roman Catholic members of the dialogue “concurred that prayers for the dead have their basis in Scripture and tradition, and that heaven is not a place of rejoicing individually in the Lord but of our being ‘together’ with him and with one another in joyful communion,” said the Rev. James Massa, executive director, USCCB Secretariat for Ecumenical and Interreligious Affairs.

“Though Lutherans acknowledged the place of praying for deceased loved ones publicly and privately, they pressed their Catholic colleagues to explain how their own Church understands the effects of such prayer,” said Father Massa.

Other Protestants will discover this in time.