Which chapter did Sam publish?

Bacchiocchi – images of his diploma and medal

Samuele Bacchiocchi has said that he will be posting scanned images of his certificates on his website as part of a statement against the allegations made by Gregorian University regarding his credentials and claims about his PhD and his dissertation.

We all hope to see that statement soon, but while we wait, here are a few scanned images he sent me a while back.

This is his certificate for his Doctoratus: 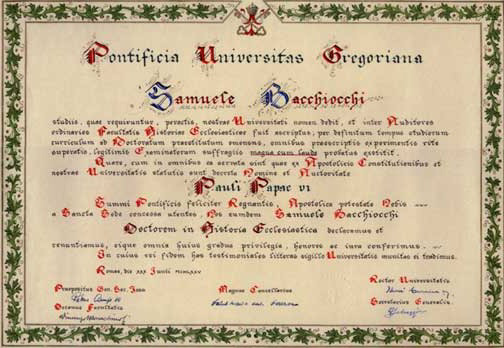 Bacchiocchi’s certificate for his Doctoratus

Click on the image to load it in a new browser.

As he states elsewhere [dead link], his certificate is not a standard Gregorian University certificate, but was handwritten specially for him because he didn’t want one saying he agreed with the Catholic faith.

Today I plan to begin the process by going to Andrews University Architecture Department to scan my three diplomas, which are too big for my scanner. Their scanner scans up to 24 x 36′. I have on hand three magnificent diplomas, all in parchement, decorated and written by skilled Vatican scribes. They were hand-written for me because I refused to accept the standard diplomas which say that the student has subscribed to the Catholic profession of faith.

Hopefully we’ll see more detail soon.  What he sent me was not a high quality scan.

The problem with this certificate for his Doctoratus:

Until then, showing the scan of his certificates will remain only his word against that of Gregorian University.

These are images he sent of his gold medal: 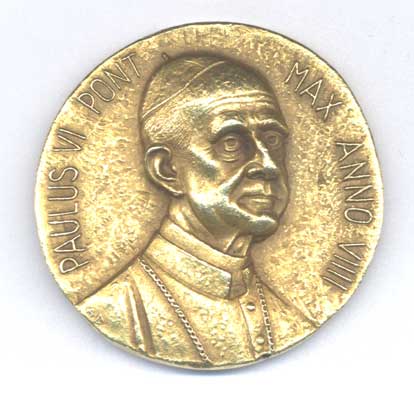 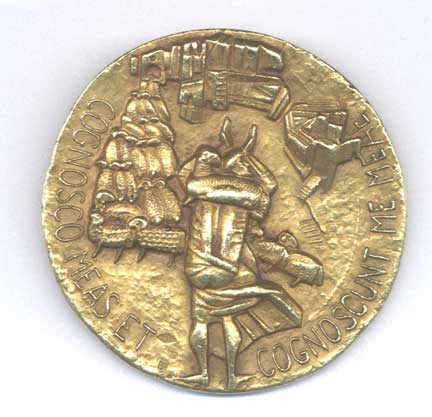 Click on the images to load them in a new browser.

It certainly looks gold, and it has the name of Pope Paul VI on the one side.  On the other side it has an image of a tortoise biting the top of a pile of sheep.  Pope Paul VI was seen as serious – maybe that was his sense of humour, or maybe it means something else – that isn’t relevant to this discussion.

The problem with his gold medal:

Anyone could scan in such a medal if they got hold of one.  It doesn’t have his name on it, and there is nothing to prove that he got it.  Maybe he’ll provide indisputable proof in his statement.  Otherwise, with Gregorian saying he didn’t get it, it’s his word against the word of Gregorian University.

These are serious questions, amongst others, that still remain.  Scanned images posted on-line don’t prove the authenticity of an item, when the University issuing it says it was never issued.  Maybe in his statement Bacchiocchi will provide more conclusive evidence than his own account of the events and unauthenticated images that the viewer cannot verify.  Maybe Gregorian will provide further statements, either with further specifics and evidence to support their statements to the USCCB and Bishop Murray, or with corrections, or a withdrawal of that statement, or provide a withdrawal of that statement in support of Bacchiocchi’s claims.  Either way, that is what is needed to conclude this controversy.

The Gregorian Controversy series is listed in full here.  Click here to go to the next post in the series.  And here for the previous post.

Posted by Duff on November 1, 2006, 2:48 am
I don’t know if you were trying to be funny or if you seriously thought that was a tortoise and a pile of sheep. It’s clearly a crowd of sheep making their way into some kind of fold in the distance.

I don’t even know who this Samuel guy is, but I’m more inclined to take his side based solely on your apparent tortoise fixation.

Posted by stephen on November 1, 2006, 7:07 am
I took another look … it still looks like a tortoise. I hope it doesn’t symbolise the speed at which Gregorian will respond to this issue.

I’m not sure whose side the tortoise will take.

Posted by Jared Olar on November 1, 2006, 4:48 am
I dunno, Duff, that really looks more like a tortoise than a sheepfold. On the other hand, what does a sheepfold look like, and would it bite the top of a sheep pyramid?

Posted by Duff on November 1, 2006, 3:40 pm
No less foolish than suggesting that it cannot possibly be authentic because Pope Paul was far too serious to put tortoises on the back of his medals.

Posted by stephen on November 1, 2006, 3:57 pm
I have no doubt that is an authentic papal coin. I never meant to suggest that it was not a real one because of the tortoise. My words “that isn’t relevant to this discussion” were meant to indicate that the strange imagery, and my comment on it, was not relevant to the issue of Bacchiocchi getting the coin.

Posted by Duff on November 2, 2006, 3:14 am
That’s alright, then. I guess that’s the trouble with the conveyance of tone. When I read it, I imagined you were being a little too snide for my liking.

Though I would never have picked it without your pointing it out, I must admit there is definitely a tortoise there – albeit a very polygonal one.

Posted by Jay on September 11, 2007, 6:23 pm
Although the images look authentic it can always be a case that these displayed images are fake diplomas, someone needs to authenticate these images so that the issue can be put to rest.