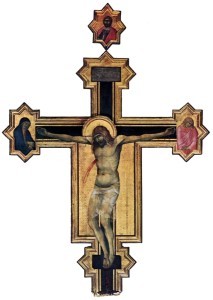 Crucifix with the Virgin and St John

The late Adventist scholar Samuele Bacchiocchi was influenced by the teachings of Herbert Armstrong, and promoted the observance of Jewish holy days instead of Christian holy days.  In his Endtime Issues #43 he rearranges the historical evidence to form a revised version of history to support his arguments.  He beautifully provides us with a typical example of how historical evidence is misapplied.

For a more complete and general look at whether or not Easter is pagan, see my first post on the topic here.

Bacchiocchi wrote that the Council of Nicaea rejected the celebration of Passover, suppressing it in favour of Pascha Sunday.  In doing so he makes numerous errors.

Well, the Sabbath was never changed to Sunday to begin with.  Christians, from the first century, recorded by the Apostles’ own disciples, began observing Sunday weekly because a) the Sabbath was no longer relevant to Christians, and b) Jesus rose from the dead that day.  And so, yes, eventually Passover observance was universally changed from 14 Nisan to the Sunday during Passover week.

Perhaps the most explicit and forceful expression of anti-Judaism for the repudiation of the traditional Passover dating is found in the letter that Emperor Constantine formulated at the Council of Nicea in A. D. 325.

Anti-Judaism of this nature is found right throughout the New Testament.  Sacrifices were no longer observed by Christians, circumcision was declared to be no longer necessary, the laws of Moses were no longer necessary.  These changes were implemented by the Apostles for the same reason that they chose to celebrate Jesus’ resurrection annually on the Sunday during Passover week.  If putting side things that were no longer necessary for Christians is anti-Judaism, then so be it – all these things in the New Testament and afterwards must then be called expressions of anti-Judaism.  I think a better term is pro-Christian, because mostly it was not an attempt to reject Judaism, but rather an application of what was still relevant to their relationship with Christ.

In desiring to establish a religion completely free from any Jewish influence, the emperor wrote regarding Passover: “It appeared an unworthy thing that in the celebration of this most holy feast we should follow the practice of the Jews, who have impiously defiled their hands with enormous sin, and are, therefore, deservedly afflicted with blindness of soul. . . . Let us then have nothing in common with the detestable Jewish crowd: for we have received from our Savior a different way. . . . Strive and pray continually that the purity of your soul may not seem in anything to be sullied by fellowship with the custom of these most wicked men. . . . All should unite in desiring that which sound reason appears to demand, avoiding all participation in the perjured conduct of the Jews.”

The Quartodeciman practice had been largely abolished decades previously, although a small group continued with the practice.  It was this small group’s practice that the Council of Nicaea decided should no longer be continued.  The established Pascha on the Sunday of Passover week was the practice throughout Christianity, with only a small group in Asia Minor doing otherwise.  What the council did was to put an end to minor arguments still going on.

The Council of Nicea (A. D. 325) put an end to the controversy over the date of Passover by decreeing that it should be celebrated on the first Sunday after the first full moon of spring. 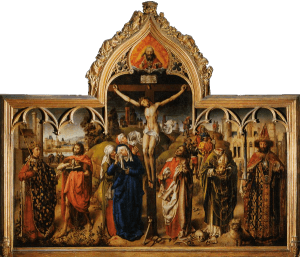 The Crucifixion of the Parlement of Paris

Now Bacchiocchi is mixing things up a little.  Yes, the Council of Nicaea, like the Council of Jerusalem before it, made a decision regarding what was to be normal practice.  But there were two controversies, and the council reached two decisions, and Bacchiocchi is not making that distinction, and his text therefore reads as if the date of Easter were, for the first time, decided at this council.  The one controversy was Quartodecimanism, practiced in a region in Asia Minor.  The other controversy was about the date of the Christian Pascha Sunday.  These were two separate issues.

The second controversy, the one regarding how to decide which Sunday was to be kept as Pascha Sunday, was a series of disagreements that arose amongst those who all kept Pascha Sunday – it was not a disagreement between Passover observers vs Pascha Sunday observers at all.  The disagreement was over whether or not to rely on the Jews’ determination of the date of Passover when determining which Sunday was to be kept as Pascha Sunday.  The Jews occasionally got the date of Passover wrong, in the eyes of Christian calendrists, and so the debate was whether or not to follow the Jews when they made such errors, or whether to calculate the date for themselves.

To ensure that Easter-Sunday would never be celebrated at the same time as the Jewish Passover, the council decreed that if the 14th of Nisan fell on a Sunday, then Easter was to be celebrated on the following Sunday.

There was nothing anti-Jewish about this part of the decision.  If Jesus was crucified on 14 Nisan, it would be irrational to celebrate his resurrection on the same day.  So, logically, if 14 Nisan was a Sunday, then the Sunday in Passover week (the Feast of Unleavened Bread, which would have begun on the Monday) would have to be the following Sunday.

There were two controversies regarding the date.  Don’t forget that.

Unfortunately, the controversy was “settled” at Nicea, not Biblically but politically.

It was settled by a council of all the elders called to one place to discuss problems that arose within the Church.  Exactly the same happened in Acts 15 at the Council of Jerusalem.  The Council of Nicaea may not have been Bacchiocchi’s idea of a biblical decision (i.e. studying the Bible outside of its original context and forming a personal fallible opinion) but it certainly followed biblical example.  Two equally ancient practices existed side by side, with historical evidence going back to show that the immediate successors to the Apostles knew that the Apostles began these practices.  In the beginning there was no problem, but when tension arose, it was necessary to make a decision one way or the other.

It was settled by suppressing the traditional observance of Passover and by adopting instead Easter-Sunday as championed by the church of Rome. 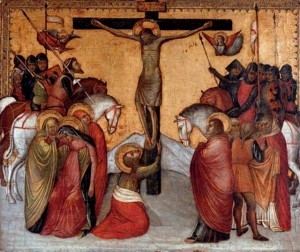 There was no traditional observance of Passover by Christians.  There was a small group of Quartodecimans in Asia Minor, and there was the majority who celebrated Pascha Sunday.  Pascha Sunday was not an innovation coming from the church of Rome – it was an ancient practice linked to Rome by the fact that Peter and Paul established the practice, according to the earliest historians based on the witness of the contemporaries of the Apostles, and Peter and Paul happened to end up in Rome and were martyred there.

Summing up, the celebration of Christ’s resurrection on the weekly Sunday and annual Easter Sunday is a post-apostolic phenomenon, devoid of biblical support. These festivals were introduced to enable Gentile Christians to show separation and differentiation from the Jews and identification with the Roman society. What most Christians ignore is that the adoption of weekly Sunday and Easter Sunday was motivated more by hate for the Jews than love for Jesus Christ. It was because of expediency rather than obedience to God’s commandments.

Summing up, the historical evidence shows that people who knew the Apostles attributed two different practices to them – one practice coming from Peter and Paul, another coming from John.  These two practices existed in harmony for nearly a century, after which tensions arose and the minority practice in a region in Asia Minor was eventually stopped.  Neither of these two practices enabled Gentile Christians to show separation and differentiation from the Jews any more than the New Testament’s abolition of circumcision, the laws of Moses, the Levitical priesthood, etc.  In no way did celebrating Christ’s resurrection allow Christians to be more able to identify with Roman society.  What Bacchiocchi is ignoring is that the early Christians followed the practices of the Apostles, or at least what the Apostles’ disciples claimed were the practices of the Apostles, and were not a religion dominated by hatred of Jews.  When no commandments of God instruct Christians to keep Passover or Unleavened Bread or Yom Kippur or Hannukah, one cannot blame Christians for finding the most practical way to celebrate Christ’s resurrection while trying to remain faithful to those Christ left to lead the Church.

One could just as easily say that Bacchiocchi’s arguments, and his revisionist history, are motivated by the prominent Adventist need to seem less Catholic, to show separation and differentiation from Catholic practice, and thus they are more expedient than following the examples set by the Apostles and those who led the Church in the decades – and eventually centuries – after the Apostles died.  For Pascha Sunday, or Easter Sunday, is in no way pagan in origin, and certainly not demonstrably pagan in it’s English/German names, and is indeed a practice that has sound historical evidence dating to as far back as 115 AD, celebrated by people who knew the Apostles themselves.

In arguing this way, Bacchiocchi is actually encouraging a form of Christianity disconnected from, and not more in line with, early Christian practice and teaching.  The writings of many early Christians survive, and it’s not hard to show that their teachings and practices were thoroughly Catholic.  The only way to separate oneself from the Catholic nature of the first few centuries of Christianity is to reject the historical record right back to the first century, and then to make up one’s own history.  I’d recommend reading the Early Church Fathers, starting with the Didache, Barnabas, Papias, Hermas, Clement of Rome, Ignatius, and Polycarp, and moving on to Irenaeus, Justin Martyr, and Tertullian – the entire series is available here.

While the Christian world celebrates the Christ’s resurrection liturgically through a church service, Seventh-day Adventists can capitalize on this occasion by reflecting on the personal, existential meaning of the resurrection. The seven points represent a summary of a sermon I was invited to preach on what the resurrection means to me.

Oh, if only Bacchiocchi had actually asked other Christians what the Resurrection meant to them instead of making assumptions about other Christians and liturgical worship that were incorrect.