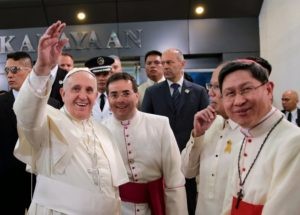 His Holiness Pope Francis with Archbishop Tagle greet members of the Papal Delegation during the arrival ceremony at the 250th PAW of the Villamor Airbase in Pasay City for the State Visit and Apostolic Journey to the Republic of the Philippines on Thursday afternoon (January 15, 2015). (Photo by Benhur Arcayan/ Malacañang Photo Bureau)
Benhur Arcayan, Public domain, via Wikimedia Commons

This site uses Akismet to reduce spam. Learn how your comment data is processed.