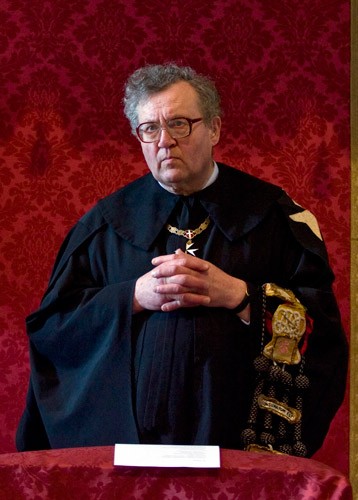 Pope Francis has demanded and obtained the resignation of the head of another sovereign state, and will appoint his own temporary supervisor until the state elects a new head of state approved by the pope.

Adventists need not be worried – this country doesn’t really count as significant.

The Sovereign Military Order of Malta (SMOM) has 3 citizens, its own passports, currency (the scudo), and postage stamps, and ambassadors to many more countries than it has citizens. Since 1798, it has had no territory other than a few buildings in Italy and Malta with extraterritorial status. After World War II, it briefly had an air force.

Canon lawyer Dr Edward Condon this morning tweeted out the reaction of many Catholics:

In terms of international law, the Holy See just annexed another sovereign entity.

A source close to the order puts it more bluntly:

‘It’s like an invasion. Nine hundred years of sovereignty wiped out overnight.’

… Festing and the leadership of the order refused to accept the authority of the inquiry, because – they argued – the Vatican had no temporal authority over a body that is independent under international law.

This is nothing that should worry Adventists. It’s a symptom of a deeper struggle within the Catholic Church.

Damian Thompson, The Spectator: Pope seizes power from the Knights of Malta, brutally ending 900 years of their sovereignty

Fr Zuhlsdorf: Is the Vatican City State annexing the Sovereign Military Order of the Knights of Malta?