I’ve written before that Sunday is not a replacement sabbath, and that the sabbath rest is fulfilled by Jesus himself. The weekly sabbath, and all it represented, lost significance to Christians, and the sabbath’s legal force came to an end at the end of the Old Covenant. 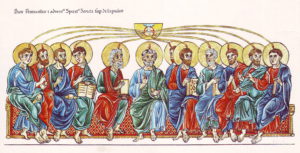 The sending of the Holy Spirit upon the Apostles

Weekly, the early Christians saw Sunday as the weekly celebration of Jesus’ resurrection.

Ignatius of Antioch, 107 AD: let every friend of Christ keep the Lord’s Day as a festival, the resurrection-day, the queen and chief of all the days of the week.
– Epistle to the Magnesians, chp 9. Ante-Nicene Fathers , vol. 1, pg. 62-63.

Justin Martyr, 150 AD: But Sunday is the day on which we hold our common assembly, because it is the first day of the week and Jesus our saviour on the same day rose from the dead.
– First apology of Justin, Ch 68

With no weekly 7th day sabbath under the New Covenant, Christians chose the most important day of the week to hold as special – Sunday, the day Jesus rose from the dead.

There are several reasons why.

Creation began on the first day of the week. That’s Sunday. That’s the day that light was created.

John 1:6-9 (KJV) – There was a man sent from God, whose name was John. The same came for a witness, to bear witness of the Light, that all men through him might believe. He was not that Light, but was sent to bear witness of that Light. That was the true Light, which lighteth every man that cometh into the world.

John 8:12 (KJV) – Then spake Jesus again unto them, saying, I am the light of the world: he that followeth me shall not walk in darkness, but shall have the light of life.

Far greater than the light created on the first day of the physical creation is the Light that is Jesus Christ.

2 Corinthians 5:17 (KJV) – Therefore if any man be in Christ, he is a new creature: old things are passed away; behold, all things are become new.

2 Corinthians 5:17 (NIV) – Therefore, if anyone is in Christ, the new creation has come: The old has gone, the new is here!

Ephesians 4:24 (KJV) – And that ye put on the new man, which after God is created in righteousness and true holiness.

Colossians 3:9-10 (KJV) – Lie not one to another, seeing that ye have put off the old man with his deeds; And have put on the new man, which is renewed in knowledge after the image of him that created him

We were born into a new creation when Jesus rose from the dead.

The two reasons the 10 commandments give for Israel’s observance of the sabbath are a) the creation, which ended in the sabbath rest, and b) the exodus from Egypt, which freed Israel from slavery.

Romans 6:18 (KJV) – Being then made free from sin, ye became the servants of righteousness.

Galatians 5:1 (KJV) – Stand fast therefore in the liberty wherewith Christ hath made us free, and be not entangled again with the yoke of bondage.

Hebrews 3:6-4:3 (KJV) – For some, when they had heard, did provoke: howbeit not all that came out of Egypt by Moses. But with whom was he grieved forty years? was it not with them that had sinned, whose carcases fell in the wilderness? And to whom sware he that they should not enter into his rest, but to them that believed not? So we see that they could not enter in because of unbelief. Let us therefore fear, lest, a promise being left us of entering into his rest, any of you should seem to come short of it. For unto us was the gospel preached, as well as unto them: but the word preached did not profit them, not being mixed with faith in them that heard it. For we which have believed do enter into rest, as he said, As I have sworn in my wrath, if they shall enter into my rest: although the works were finished from the foundation of the world.

Christ freed us from bondage to sin by his death and resurrection. The exodus from Egypt foreshadowed our escape from the clutches of sin. We have a greater exodus to celebrate now, in Christ.

Sunday completes the sabbath as a day

The old creation ceased on the sabbath, and the new creation took up where it left off, on the following day, the first day of the week.

The exodus from Egypt had a lamb sacrifice; the sacrifice of Jesus on the cross brought about our exodus from a world fallen to sin into a world of grace.

The two things Israel was to look back on were the old creation and the exodus from Egypt. Both are fulfilled in Christ, and he offers us a better celebration – his resurrection from the dead, freeing us from the Egypt of sin, and making us a new creation in Christ.

What better choice is there for a weekly celebration of Jesus than Sunday?

Christ has died!
Christ has risen!
Christ will come again!