Ellen White has a history of making up history. She also has a history of taking completely non-Adventist groups like the Albigensians and Waldensians and claiming they were proto-Adventists. (The Waldensians were far too Catholic to come close to being Adventist, and the Albigensians were gnostics who shunned marriage and believed in a set of two Gods – the evil God of the Old Testament and the good God of the New Testament.) 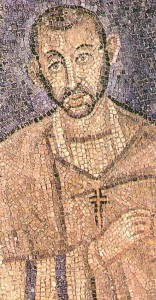 Late antique mosaic of Saint Ambrose in the church St. Ambrogio in Milan. This might be an actual portrait, made while Ambrose was living.

Here is an extract of an excellent article posted on our Facebook group:

For a number of years Milan was the capital of the kingdom of Italy, and since the fourth century it has surpassed Rome in extent, and in many respects in importance also. Here was the head of the church founded by St. Ambrose, whose diocese maintained its independence of the popes until the middle of the eleventh century. … their faith was essentially Protestant, and in strong opposition to the Roman creed.
– Ellen White, The Review and Herald, June 1, 1886, Visit to the Vaudois Valleys

Rubbish. Anyone who has read up on St Ambrose of Milan knows otherwise.

Your grace must be besought not to permit any disturbance of the Roman Church, the head of the whole Roman World and of the most holy faith of the Apostles, for from thence flow out to all the bonds of sacred communion.
– St Ambrose, To Emperor Gratian, Epistle 11:4

There’s a lot more to read – head over to the full article at the Golden Sword Apologetics blog here (which has two YouTube videos as well).