The Divine Liturgy and Salvation 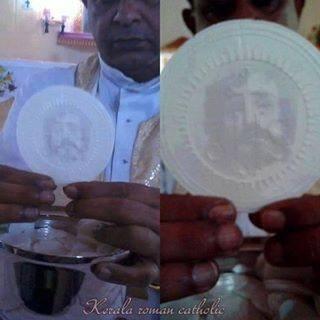 A possible Eucharistic miracle has occurred at the Syro-Malabar Catholic parish of Christ the King in the village of Vilakannur, in the Kannur district of Kerala, India.

On 15 November, an image of Christ appeared on the Host shortly after consecration at the 7am Mass said by Fr Thomas Pathickal.  The face remains after 9 days.  This occurred a few days after anti-Catholic pamphlets mocking the Eucharist were distributed locally.

Different reports are conflicting as to whether the Host has been subjected to testing.

God works in mysterious ways.  This may be real – it looks far more realistic than many of the supposed images I’ve seen pictures of.  If it’s faked or merely a natural phenomenon creating an illusion, then perhaps God is still using the event to counter anti-Catholic propaganda blaspheming the Eucharist.  CS Lewis, whose death’s 50th anniversary occurred two days ago, wrote that there is no need for all miracles given by God to have a solely supernatural origin.