What Catholics Believe – Mary, the Virgin Mother of God 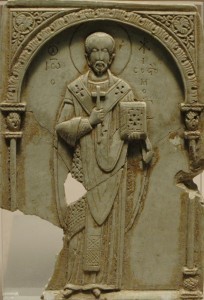 It is, that when God formed man, he implanted within him from the beginning a natural law. And what then was this natural law? He gave utterance to conscience within us; and made the knowledge of good things, and of those which are the contrary, to be self-taught. For we have no need to learn that fornication is an evil thing, and that chastity is a good thing, but we know this from the first. And that you may learn that we know this from the first, the Lawgiver, when He afterwards gave laws, and said, “You shall not kill,” Exodus 20:13 did not add, “since murder is an evil thing,” but simply said, “You shall not kill;” for He merely prohibited the sin, without teaching. How was it then when He said, “You shall not kill,” that He did not add, “because murder is a wicked thing.” The reason was, that conscience had taught this beforehand; and He speaks thus, as to those who know and understand the point. Wherefore when He speaks to us of another commandment, not known to us by the dictate of consciences He not only prohibits, but adds the reason. When, for instance, He gave commandment respecting the Sabbath; “On the seventh day you shall do no work;” He subjoined also the reason for this cessation. What was this? “Because on the seventh day God rested from all His works which He had begun to make.” (Exodus 20:10) And again; “Because thou were a servant in the land of Egypt.” (Deuteronomy 21:18) For what purpose then I ask did He add a reason respecting the Sabbath, but did no such thing in regard to murder? Because this commandment was not one of the leading ones. It was not one of those which were accurately defined of our conscience, but a kind of partial and temporary one; and for this reason it was abolished afterwards. But those which are necessary and uphold our life, are the following; “You shall not kill; You shall not commit adultery; You shall not steal.” On this account then He adds no reason in this case, nor enters into any instruction on the matter, but is content with the bare prohibition.
– Homilies on the Statutes 12:9