According to John, Christ died on the cross at the exact moment when in the temples nearby, the lambs were being slaughtered for the Pascal feast. His death coincides with the sacrifice of the lambs. That however means that he died on the eve of Passover … Most of the exegetes were of the opinion that John did not want to give us the exact, historic date of Christ’s death, but had instead chose a symbolic date to highlight the one profound truth: Jesus is the true Lamb of God who shed his blood for us. …
The discovery of the writings of Qumran has in the meantime found a convincing and possible solution that, while not accepted by all, could still have a high level of probability. We’re now in a place to say that what John related is historically precise. Jesus really spared his blood on the vigil of the Pasch in the hour of the slaughter of the lambs.
– HH Pope Benedict XVI, sermon, 5 April 2007, Holy Thursday [emphasis mine]

But something else in that Holy Thursday homily knocked me out, which I heard for the first time ever. There’s always been a battle over whether the Last Supper took place on Passover night or the day before. … Scholars tell us that, since Passover was always on a fixed date, there were times when it fell on the Sabbath, and then came the dilemma of which of God’s mandated feasts do you keep (since one involves heavy work and one requires no work be done)? So in his homily, B16 tells of scholarly research that says that the people of Qumran (where the Dead Sea scrolls were found) would, in the case of the Passover and Sabbath collision, have their seders the day before, with all the froo-froo, but intentionally without a passover lamb. The implications of Jesus and the 12 apostles having such a seder are interesting. With no lamb on the their table, Jesus himself is the Lamb at that seder (adding a whole new profound depth to his command to eat his body and drink his blood).

I’ve been waiting years to hear this most logical 14 Nisan crucifixion timing from a Catholic priest. And now I hear it from the pope himself. I always get given the 15 Nisan story. The explanation above goes a long way to explain why the Wednesday crucifixion theory of Herbert Armstrong is wrong, so ironically it was Herbert Armstrong who was adamant that Jesus died on 14 Nisan. 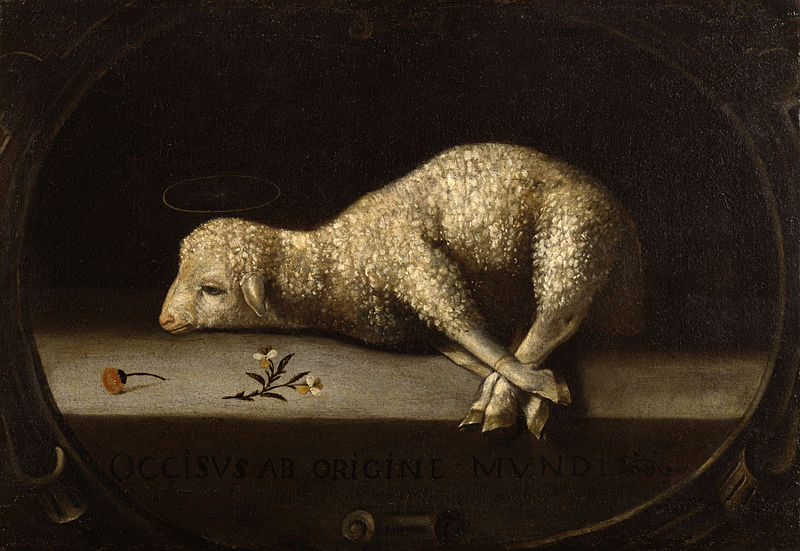 The Sacrificial Lamb – Josefa de Ayala, ca 1670
Agnus, qui est occisus ab origine mundi
The lamb, which is killed from the beginning of the world

Posted by Jared Olar on April 7, 2007
Very interesting. Of course as a former Armstrongist I was brought up believing that Jesus died on Nisan 14 in the afternoon, and was surprised to find that many (include Church Fathers, and I believe Pope Leo the Great) said Jesus died on Nisan 15. I’ve never been able to see how a Nisan 15 crucifixion could agree with what the four Gospels say. Jesus’ enemies wanted to make sure they did away with Him before the festival began (Mark 14:2), but Nisan 15 is the first day of the festival. And as Pope Benedict XVI said, St. John clearly places the death of Jesus on Nisan 14, not Nisan 15. Many say that St. John contradicts the Synoptics on that point, but I don’t see it. St. Mark places the Last Supper on “the first day of unleavened bread, when they killed the Passover.” The Passover lambs were killed on Nisan 14, not Nisan 15. Thus, what St. Mark says agrees with a placement of the Last Supper on the evening that commences Nisan 14, the day the Passover lambs were killed. If I’m not mistaken, Nisan 14 is the final day when leavened bread must be disposed of, and so was sometimes termed a “day of unleavened bread” even though the festival did not actually start until the evening that commenced Nisan 15.

Then there is the concern that Jesus and the robbers not be left on their crosses on the Sabbath — and that Sabbath, St. John said, was a “high day,” and St. John says the day Jesus died was the Preparation Day for the Passover, i.e., Erev Pesach, Nisan 14. Evidently that means the Sabbath of that week was also the first day of the festival of unleavened bread, i.e. Nisan 15.

We must also remember that the annual festival days had almost as many rules as the weekly Sabbath. It is simply impossible that the Jews would hold a legal proceeding and an execution on Nisan 15, no matter what day of the week that was.

Now, if it is true that the Essenes of Qumran sometimes had their Passover Seders a day early, without lamb, then that means it would not have been unheard of for Jews to have Seders without lambs. That would explain why the disciples did not seem surprised that Jesus had a Seder a night earlier than usual, without a lamb (for, of course, He was the True Passover Lamb). It’s also interesting that Jesus gave His disciples directions for how to find the Cenacle by telling them to follow a man carrying a large jar of water — we know the Essenes were even more devoted to ritual ablutions and immersions than the Pharisees. Did Jesus make arrangements for the Last Supper with an Essene, who would not object to a Seder that was a day earlier than usual?