Simon the stone, Peter the rock 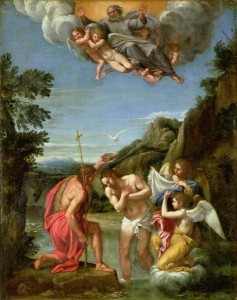 Francesco Albani’s The Baptism of Christ

In the 2nd century we see the development of Adoptionism, teaching that Jesus became God at the time of his baptism.

From Wikipedia’s article on Theodotus of Byzantium:
Theodotus claimed that Jesus was born of the Virgin Mary and the Holy Spirit as a mortal man, and though later adopted by God upon baptism, was not himself God until after his resurrection.

From Wikipedia’s article on Paul of Samosata:
Paul’s teaching is a form of Monarchianism, which emphasized the oneness of God. Paul taught that Jesus was born a mere man, but that at his baptism he was infused with the divine Logos or word of God. Hence, Jesus was seen not as God-become-man but as man-become-God.

Also from Wikipedia’s article on Paul of Samosata [quoting Paul of Samosata]:
“Having been anointed by the Holy Spirit he received the title of the anointed (i.e. Christos), suffering in accordance with his nature, working wonders in accordance with grace. For in fixity and resoluteness of character he likened himself to God; and having kept himself free from sin was united with God, and was empowered to grasp as it were the power and authority of wonders. By these he was shown to possess over and above the will, one and the same activity (with God), and won the title of Redeemer and Saviour of our race.”

It was during the 300’s AD that Nestorianism came about.  Apollinarius was one of the first to lay the groundwork for that idea.  At the Council of Ephesus in 431 AD Nestorius said, “I can never allow that a child of three months old was God.”

From Wikipedia’s article on the Council of Ephesus:
Nestorianism emphasized the human nature of Jesus at the expense of the divine. The Council denounced Patriarch Nestorius’ teaching as erroneous. Nestorius taught that Mary, the mother of Jesus gave birth to a man, Jesus, not God, the Logos (The Word, Son of God). The Logos only dwelled in Christ, as in a Temple (Christ, therefore, was only Theophoros, Greek for the “Bearer of God”.

The next three are quotes from Nestorius:

From Nestorius’ letter to St Cyril:
Holy scripture, wherever it recalls the Lord’s economy, speaks of the birth and suffering not of the godhead but of the humanity of Christ, so that the holy virgin is more accurately termed mother of Christ than mother of God. Hear these words that the gospels proclaim: “The book of the generation of Jesus Christ, son of David, son of Abraham.” It is clear that God the Word was not the son of David. Listen to another witness if you will: “Jacob begat Joseph, the husband of Mary, of whom was born Jesus, who is called the Christ. ” Consider a further piece of evidence: “Now the birth of Jesus Christ took place in this way. When his mother Mary had been betrothed to Joseph, she was found to be with child of the holy Spirit.” But who would ever consider that the godhead of the only begotten was a creature of the Spirit?

Also from Nestorius’ letter to St Cyril:
(Hence also Christ calls himself the lord and son of David: “‘What do you think of the Christ ? Whose son is he ?’ They said to him, ‘The son of David.’ Jesus answered and said to them, ‘How is it then that David inspired by the Spirit, calls him Lord, saying, “The Lord said to my Lord, sit at my right hand”?'”. He said this as being indeed son of David according to the flesh, but his Lord according to his godhead.) The body therefore is the temple of the deity of the Son, a temple which is united to it in a high and divine conjunction, so that the divine nature accepts what belongs to the body as its own. Such a confession is noble and worthy of the gospel traditions. But to use the expression “accept as its own” as a way of diminishing the properties of the conjoined flesh, birth, suffering and entombment, is a mark of those whose minds are led astray …

Also from Nestorius’ letter to St Cyril:
For it is necessary for such as are attracted by the name “propriety” to make God the Word share, because of this same propriety, in being fed on milk, in gradual growth, in terror at the time of his passion and in need of angelical assistance.

The outcome was that it was held that Mary gave birth to a person who was fully man and fully God, so in that sense she could be called the mother of God, because the person she was mother to was not separated from God the Son.  The next council clarified this more explicitly.  In no way did the originators of this definition believe that Mary was the source of any aspect of Christ’s divinity, and the title was intended to describe the nature of Christ, not teach any sort of heretical notion of Mary existing before Abraham like Christ did, or being an originator of divinity.

From the Definition of the Council of Chalcedon:
Following the holy Fathers we teach with one voice that the Son [of God] and our Lord Jesus Christ is to be confessed as one and the same [Person], that he is perfect in Godhead and perfect in manhood, very God and very man, of a reasonable soul and [human] body consisting, consubstantial with the Father as touching his Godhead, and consubstantial with us as touching his manhood; made in all things like unto us, sin only excepted; begotten of his Father before the worlds according to his Godhead; but in these last days for us men and for our salvation born [into the world] of the Virgin Mary, the Mother of God according to his manhood. This one and the same Jesus Christ, the only-begotten Son [of God] must be confessed to be in two natures, unconfusedly, immutably, indivisibly, inseparably [united], and that without the distinction of natures being taken away by such union, but rather the peculiar property of each nature being preserved and being united in one Person and subsistence, not separated or divided into two persons, but one and the same Son and only-begotten, God the Word, our Lord Jesus Christ, as the Prophets of old time have spoken concerning him, and as the Lord Jesus Christ hath taught us, and as the Creed of the Fathers hath delivered to us.

A few relevant questions for those who claim that Mary was not the mother of God in the Incarnation: