Where did we get the New Testament?  How was it compiled?

The Apostles didn’t leave instructions as to which writings were to be included in the Bible.  That is why there was a lot of debate about which texts were considered inspired in the first few centuries. 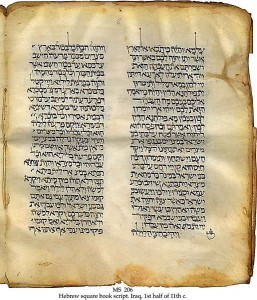 Our first list of New Testament books that includes all the books we use today comes from the Catholic bishop Athanasius, who was instrumental in defining the Trinity as doctrine at the Council of Nicaea in 324-5 AD.  This was also the first list to exclude texts not considered as canonical today.

Continuing, I must without hesitation mention the scriptures of the New Testament; they are the following: the four Gospels according to Matthew, Mark, Luke, and John, after them the Acts of the Apostles and the seven so-called catholic epistles of the apostles — namely, one of James, two of Peter, then three of John and after these one of Jude. In addition there are fourteen epistles of the apostle Paul written in the following order: the first to the Romans, then two to the Corinthians and then after these the one to the Galatians, following it the one to the Ephesians, thereafter the one to the Philippians and the one to the Colossians and two to the Thessalonians and the epistle to the Hebrews and then immediately two to Timothy , one to Titus and lastly the one to Philemon. Yet further the Revelation of John. [New Testament Canon, Festal Letter of St Athanasius]

The second such list was an official statement from Pope St Damasus I in 382 AD – I have added the better-known names in [brackets] where confusion might otherwise arise: 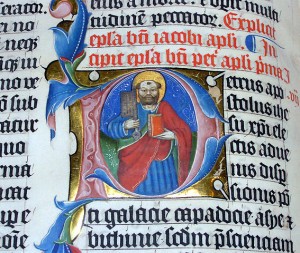 A closeup of the illuminated letter P in the 1407AD Latin Bible on display in Malmesbury Abbey, Wiltshire, England.

Ironically for those who object loudly to Catholicism, the very New Testament they use was compiled by Catholic bishops and popes, who dealt with the controversy over what was inspired and what was not in the 3 centuries before the final list was completed.  The Holy Spirit used the Catholic Church to formalise the New Testament in the form that we know it today, and it is from these 4th century Catholics that we get our canon.  If Catholicism is apostate, as some claim, why did God use a group of clerics who honoured Mary, said Mass, kept Sunday and Easter, had 7 sacraments, etc., to bring the inspired word of God together into one volume?