His Holiness Pope Benedict XVI is a cat lover!

On his blog at Musum Pontificalis, he gives us a glimpse of his upcoming encyclical, Of the Dignity of Cats – Dignitatis Felidae.  As he says, he has let the cat out of the bag, but HE Francis Cardinal Arinze has suggested that it be delayed until 24 other encyclicals have been written.

I was going to ask His Holiness why he named it Dignitatis Felidae, but someone else, coincidentally with the same name as I, had already asked the same question.  His Holiness has replies to various issues here and here.

“Regarding the naming of encyclicals, traditionally the title is taken from the key words of the first sentence, which is why some of them have a somewhat less than descriptive title. For example, how could anyone possibly know, based on the title, that Quamquam Pluries had anything whatsoever to do with devotion to St. Joseph? I simply didn’t want my masterpiece to be entitled Creaturae Splendor, because the subject is more specific than the whole of creation.“

Concern was raised about the appropriateness of such an encyclical.  Not only does the Bible not endorse pet ownership, but Jesus himself never owned any pets.  Of great concern is the fact that pagans such as the Egyptians worshipped cats, and people may consider this to be too similar.

This is a picture of my cat: 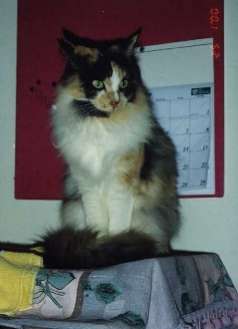