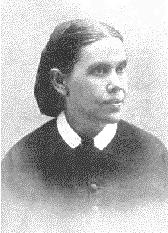 If Jesus preserved his Church at all times, and did in fact remain with it at all times as he promised, then the inescapable conclusion is that the Catholic Church of the first, second, third, and later centuries is the Church to which he made these promises.  Such a conclusion is unacceptable to the carnal mind, and so several Christians who choose not to accept the biblical authority of the Church have tried to find a way around this.  They usually turn to the Albigensians, Waldenses, and other heretical sects to try to find a “true church” outside of Catholicism, but always in existence.  If they can’t find such a church, they must either accept Catholicism, or consider Jesus to be a liar.

Ellen White was one of these people who grasped desperately at the non-Catholic sects of the Dark Ages to try to find a “true church.”  Without knowing the slightest thing about them, she discovered a sect called the Albigensians, saw that they were not Catholic, that they were, like her, rabid anti-Catholics, and claimed that this was in fact the true Church founded by Jesus.  This is what she wrote in her “inspired” writings:

The gospel had been planted in Bohemia as early as the ninth century. The Bible was translated, and public worship was conducted, in the language of the people. … Heaven had provided other agencies for the preservation of the church. Many of the Waldenses and Albigenses, driven by persecution from their homes in France and Italy, came to Bohemia. Though they dared not teach openly, they labored zealously in secret. Thus the true faith was preserved from century to century.
— Ellen White, Great Controversy, Chapter 6, paragraph 1, p97.

Century after century the blood of the saints had been shed. While the Waldenses laid down their lives upon the mountains of Piedmont “for the word of God, and for the testimony of Jesus Christ,” similar witness to the truth had been borne by their brethren, the Albigenses of France.
— Ellen White, Great Controversy, Ch 15, p271.

But who are these people the Adventist church claims to be the true Christians ?  Surely they must be similar in doctrine to modern Adventists, if Jesus’ promises were true, and the Church was preserved from the forces of darkness ?

Briefly, the Albigensians were a Gnostic sect.  Gnosticism is described in the Bible – 1 John 2:18,22 and 2 John 1:7 – they are called “antichrist.”  An analysis of their beliefs will show that they cannot be the true Christianity of Jesus and the Apostles.  Briefly, these people denied that Jesus was God.  They believed in 2 Gods, one good, and one evil.  The evil God was the God of the Old Testament, the creator of all physical matter (including the human body) and what it does, and the author of evil.  The good God was the creator of the spiritual world and was the God of the New Testament.  He sent Jesus, a created being, to earth to liberate the divine souls trapped in the physical bodies by the evil God.  They did not believe that Jesus really came in the flesh (cf 1 John 2:18,22 and 2 John 1:7) but rather that this was an illusion.  His celestial essence penetrated Mary’s ear, and this is how it got into her to later appear to be born.  His suffering was not real, but also merely an illusion.  Jesus never actually saved us, he merely showed us the way by which me might obtain salvation.  They believed in reincarnation, and eventually salvation after many rebirths.  They believed that marriage was to be avoided, and practiced instead extramarital sex.  They also practiced ritual suicide.

Are these the people Ellen White and the Adventist church want to associate themselves with ?  Many Adventists appear to believe Ellen White when she says these things about Albigensianism.  If the Bible calls Gnostic sects “antichrist,” what does that say about Ellen White and her theology ?

For more information and evidence, please see the following post by Dave Armstrong:

What about the Waldenses ?  Were they primitive Adventists ?  There were two groups of Waldenses – the Perfect ones and the Friends or Believers.  The Believers stayed within the Catholic Church, receiving the Catholic sacraments, including the Eucharist at the Mass, with the exception of Penance, which they received from their own ministers.  The Perfects were divided into 3 classes – bishops, priests, and deacons.  The bishops administered the sacraments of confession and the Eucharist, while the priests also helped in hearing confessions of the laity.  The Waldenses were very much believers in sacraments, just like Catholics.  In fact a lot of their beliefs were very much Catholic, too Catholic in fact for them to pass as an ancient form of Adventism or Protestantism.  Is this the sort of religion, with a Mass and priests hearing confession, and most laity receiving Catholic sacraments, the sort of religion that Adventists feel are their spiritual brethren ?

For more information, look in your encyclopaedia [Wikipedia: Albigensians] [Wikipedia: Waldenses], and at the following posts by Dave Armstrong:

My final question is – are these groups of people the original Christian Church, spiritual brethren of the modern Adventist church ?  That’s what Ellen White is telling you.  But it is not what history reveals to be the case.