Catholics, and most other Christians, believe that we are under the law of Grace, and that the law Jesus gave is greater than, and supersedes, the 10 commandments and the rest of the Old Testament law.

As I’ve explained before, the 10 commandments are the words of the Old Covenant, the Covenant given at Sinai, and as such, in a legal sense, Christians are under a different law because we’re under a different covenant. The moral principles of the Old Testament, and the 10 commandments, exist under all true laws, and therefore exist within the law of the New Covenant.

Adventists, and some others, differ here. They say that the 10 commandments are unchanging, forever, and are part of God’s character.

If Adventists are right, then the 10 commandments are the supreme law, above which there is no better law. 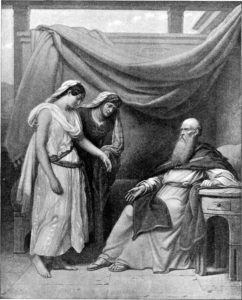 Galatians 4:22-26 compares two women and two covenants. The women? The two wives of Abraham – Hagar and Sarah. The covenants? The Old Covenant at Sinai, and the New Covenant with Christ.

Galatian 4:22-26 (KJV) – For it is written, that Abraham had two sons, the one by a bondmaid, the other by a freewoman. But he who was of the bondwoman was born after the flesh; but he of the freewoman was by promise. Which things are an allegory: for these are the two covenants; the one from the mount Sinai, which gendereth to bondage, which is Agar. For this Agar is mount Sinai in Arabia, and answereth to Jerusalem which now is, and is in bondage with her children. But Jerusalem which is above is free, which is the mother of us all.

According to Paul, Hagar and the covenant at Sinai are linked, while Sarah and the New Covenant are linked.

The 10 commandments are the very words of the covenant at Sinai.

This means that, for Christian theology, Christians are free, under Jerusalem above, under a promise given to Abraham regarding Sarah.

The other side, those who are Hagar’s children – Muslims and Adventists – are in bondage, following the covenant at Sinai.

That’s a huge revelation regarding Adventism. They lack, due to their allegiance, a full part in the New Covenant.