Adventist misrepresentation of The Constitutions of the Holy Apostles

St Patrick is imagined to be a Sabbath keeper by many Adventists.  The two writings we have of his, the Confession of St Patrick and his Letter to Coroticus, say nothing about the Sabbath. 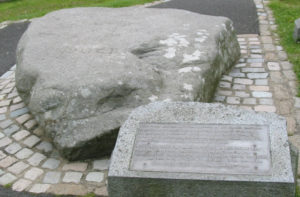 Reputed site of burial of Saint Patrick, in churchyard of cathedral in Downpatrick, Northern Ireland

Nothing Adventist or Sabbatarian about those letters – in fact they are quite Catholic. Do you know of Adventist bishops? Adventists who do penance? Adventists monks and nuns? He certainly didn’t believe in unconsciousness after death, awaiting the resurrection of the body.

The one minor thing Adventists can use to pretend he wasn’t Catholic was the fact that his father was a deacon, and his grandfather was a priest. Their claim based on this?

“The absence of celibacy in the Celtic Church gives added proof to the fact that the believers had no connection with the church at Rome.”
– Sabbath Truth (sic) website

This is absurd. Catholicism, and really only fully so in the West, practices celibacy as a discipline, not a doctrine of faith. And what’s more, celibacy only became a rule in the 11th century.

Pope Adrian II was married. Maybe he was an Adventist pope? That was 867-872 AD.

Pope Hormisdas (pope from 514-523 AD) was married, and his son became Pope Silverius in 536 AD. Were they Adventists? This was long after Patrick in the 300’s AD.

Or is the Sabbath Truth site just misrepresenting the facts in order to push its agenda?