The Sabbath first revealed to man 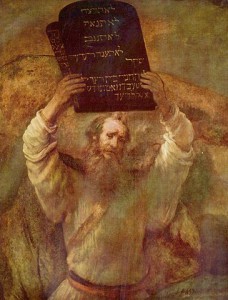 Moses with the Tablets of the Law – Rembrandt

Exodus 16:23,26 (KJV) – And he said unto them, This is that which the LORD hath said, To morrow is the rest of the holy sabbath unto the LORD: bake that which ye will bake to day, and seethe that ye will seethe; and that which remaineth over lay up for you to be kept until the morning. … [26] Six days ye shall gather it; but on the seventh day, which is the sabbath, in it there shall be none.

Exodus 16 is the very first time in the Bible when anyone is told to keep the Sabbath. What has just happened is that Israel has come out of Egypt. If we compare Exodus 20 to Deut 5, we get two things that the Sabbath represents. First – creation (in the Exodus text). Second – coming out of Egypt (in the Deuteronomy text). God’s intention must have been to have a dual symbolism there.

Exodus 20:11 (KJV) – For in six days the LORD made heaven and earth, the sea, and all that in them is, and rested the seventh day: wherefore the LORD blessed the sabbath day, and hallowed it.

Deut 5:15 (KJV) – And remember that thou wast a servant in the land of Egypt, and that the LORD thy God brought thee out thence through a mighty hand and by a stretched out arm: therefore the LORD thy God commanded thee to keep the sabbath day.

If God had revealed the Sabbath prior to Israel’s exodus from Egypt, the intended symbolism would have been incomplete. However, that doesn’t mean he could not have done so. We just have no evidence that he did so.

Assuming that he did so prior to the exodus, it would still not mean that the Sabbath was going to last forever. Physical circumcision was given to Abraham long before the exodus, but we know from the New Testament that it is no longer necessary. Circumcision obtained a spiritual meaning, as did the Sabbath. All covenants prior to the New Covenant ceased their literal and legal role and became spiritually applicable in the New Covenant. Their literal signs were turned into spiritual applications. The Abrahamic covenant and the Mosaic covenant extended now to all of humanity. Circumcision was of the heart, the Sabbath was our rest in Christ, the sacrifices were now Jesus’ sacrifice, the Levitical priesthood was now the priesthood of all believers.

Unlike circumcision, the Sabbath was not initially given as a part of a covenant. Until it was, it had the impact of any other non-covenant law given by God. Only when it was included in the words of the Old Covenant, the 10 Commandments, did that happen.

Also worth highlighting is that the dual symbolism of the Sabbath has a clear fulfillment in the New Testament.