Catholic prayers via the Knights of Columbus 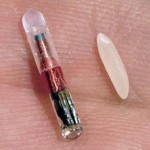 RFID chip compared to a grain of rice

No, Pope Francis is not making people get microchipped.  I’ve seen this nonsense in two places now.

Second, the claim comes from a satirical website, not a real newspaper.  It’s a joke!  Fodder for anti-Catholics in need of a conspiracy theory supporting their misguided beliefs about why most of Christianity has damned.

Here’s a nice look at why this is so funny – Pope Francis is micro-chipping Catholics?
.