“Go and repair my Church” – What should Pope Francis repair?

There has been some chatter about what Pope Francis will do with Pope Benedict’s liturgical reforms.  And his chasuble he used at the closing Mass of the Conclave.  And that he spoke instead of sang the prayers.  (He only has one lung!)

I prefer the traditional Latin Mass, aka the Extraordinary Form.  (For videos, see here.)  Worship of God should, in my opinion, reflect the glory of God.  Not our favourite rock band’s style.  Not have a party.  Traditionally Christians use incense, gold, beautiful stained glass windows, candles, bells, etc., to give praise to God.  The Bible is full of tangible expressions of worship – incense, gold, statues (yes, statues!), singing of psalms (which were designed to be sung; Gregorian chant (and that found in the Eastern Churches) is simply a natural development of Jewish singing), etc.  I feel the traditional Latin Mass brings that out very well.  So do the Eastern liturgies.  Silence is important.  Music is important.  The visual senses are important.  These things bring people closer to God.  They elevate the soul to an awareness of the Divine.  (Yes, so does prayer and reading the Bible, practices which the Church tells us to engage in.  And yes, it’s not at all difficult to follow the Latin Mass, and participate fully in it with one’s prayers.)  To me, the Latin Mass focuses solely on God and doesn’t rely on the charm or humour of the priest. 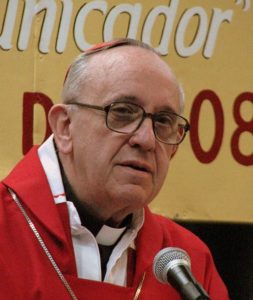 John 12:3-8 (KJV) Then took Mary a pound of ointment of spikenard, very costly, and anointed the feet of Jesus, and wiped his feet with her hair: and the house was filled with the odour of the ointment. Then saith one of his disciples, Judas Iscariot, Simon’s son, which should betray him, Why was not this ointment sold for three hundred pence, and given to the poor? This he said, not that he cared for the poor; but because he was a thief, and had the bag, and bare what was put therein. Then said Jesus, Let her alone: against the day of my burying hath she kept this.  For the poor always ye have with you; but me ye have not always.

Will Pope Francis have elaborate ceremonies, dressed in a tall hat and flowing robes?  I hope so.  Not because the Servant of the Servants of God is, by himself as Jorge Bergoglio (or Joseph Ratzinger, or Karol Wojtyla), anything to marvel at.  Rather, because of what and who he represents, and the responsibility he is given by God.  The pomp and ceremony is not there to glorify the pope.  It is there to glorify God.  Pope Francis has already shown that, as a person, he is humble.  He will do well to bring that as a strong point into his papacy.  I hope he is given the discernment to separate humility for himself from the glory due to God.  (I sincerely doubt he will do otherwise, and so I won’t be sitting around counting candles and making comparisons.)

Will Pope Francis suppress the Extraordinary Form of the Mass, allowing us only the Ordinary Form, thereby reversing the much-needed liturgical reform of Pop Benedict?  He has that authority.  He can bind and loose with the authority given to Peter.  But I don’t believe he will.  Popes have power, but the uproar from the growing voice of those who are grateful for Pope Benedict’s liturgical reforms would be too devastating.  And, guess what?  As Cardinal in Argentina, he responded very, very rapidly to Pope Benedict’s request that the old Latin Mass be made available for all.  Within 48 hours, he implemented Summorum Pontificum in his diocese.  The original report from 2007 is in Spanish; Fr Z blogs on it here in 2013 – Card. Bergoglio, in 2007 after Summorum Pontificum, TLM within 48 hours

Pope Francis may not be Pope Benedict.  I’m not sure we want him to be.  But I believe he will be a loving, fatherly pope.  He reminds me very much of Pope John Paul I, the Smiling Pope, who was my 2nd pope.  Pope Francis is my 5th.

14 March: In the interest of accuracy, it turns out that the Mass was a hybrid EF/OF Mass. The same mistake was made here quite sincerely and without malintent, and nobody (except a population of n<5) understood that it wasn’t what Pope Benedict intended. It faded due to the health of the priest. Currently we have 4 priests (in good standing with their bishops and Rome) in the country saying the EF Mass. So few people who knew what was what, that an accidental hybrid was not surprising. Let’s not subject Pope Francis to the same sort of misinformed maltreatment Pope Benedict was given about the German army and the abuse scandals.

15 March: And somewhat of a rebuttal of my comments here, relating to desacralising the papacy (although not directly aimed at my blog post, but rather at someone else) [dead link as of May 2020]

15 March: Over at Fr Z’s blog, after the above became public, AnneG points out the following:

I just googled in Spanish and there are several Latin masses in EF in BA that are Catholic, not SSPX that I found in just a few minutes. About the same number of SSPX communities, though.

So there were indeed EF Masses said by priests in Pope Francis’ previous diocese that are not hard to identify if you can manage Spanish.

Further down in Fr Z’s post’s comments is this by lawoski:

Liturgically speaking, one hopeful indication (from a conservative viewpoint) is that as Archbishop, Pope Francis acted as the ordinary bishop for Eastern Catholics in Argentina who did not have their own hierarchy. It has been my observation that priests and bishops who have regular contact with the Eastern churches tend to be more conservative regarding liturgical matters. Time will tell.

15 March: Regarding the ongoing attacks on Pope Francis from some of the traditionally-minded Catholics, over at Canturbury Tales, which is a blog that supports the traditional view, there is a statement that sums up what this nonsense is doing for traditional Catholicism:

Way to go, trads! We have been working so hard under the pontificate of Pope Benedict XVI to demonstrate that we are not an inbred subculture of angry, hateful, quasi-schismatic, Jansenistic, holier-than-the-Pope Catholics. Everyone thinks that we who attend the 1962 liturgy are judgmental, Pharisaical, and rude. And guess what. You just amplified that terrible reputation one hundredfold.

Please don’t annoy Pope Francis.  He’s the one God has put here to lead us, and we/you want him on our/your side.

17 March: Pope Francis was mentored at school by Father Stefan Czmil, a Ukrainian Catholic priest, and “concelebrated” (sounds like he was an altar server) in the Ukranian Byzantine Divine Liturgy.  “Pope Francis, as archbishop of Buenos Aires, was assigned as ordinary for Eastern Catholics, specifically those who at the time did not have members of their own hierarchy. Our Eparchy in Argentina is, let’s say, suffragan to the Archbishop’s seat of Buenos Aires.” — Patriarch [Major Archbishop] Sviatoslav Shevchuk of the Ukrainian Greek Catholic Church.  This is a very good sign for a) the traditional Latin Mass and b) unity with the Orthodox Churches.  Those with a connection with the Eastern Churches are usually open to the more reverent forms of the Divine Liturgy, such as the Divine Liturgy of Pope St Pius V, aka the Divine Liturgy of St Gregory, aka the Extraordinary Form of the Roman Rite.

Some links worth reading on this topic:

God said to St Francis of Assisi, “Go and repair my Church” – and this is what we should pray for from Pope Francis.