Off Gilbert’s blog [now defunct], a quote from Ellen White.

He took humanity upon Him, but He did not leave His divinity; He clothed His divinity with humanity. He took humanity upon Himself in order to carry humanity through that commandment-keeping people to give the testimony to the whole universe of heaven. He stood in humanity to bear all the battles and conflicts as our Head, thus elevating with God every human being on the face of the earth. Now, Christ took humanity that humanity might take His divinity. He took our nature that He might give to human nature His nature. He has passed over the place where Adam fell, and redeemed Adam’s fall. Every reasoning power, every particle of discernment, discrimination, every action of the mind that God has given man, exercise it and not be like a leaf that can be blown by every wind hither and thither. {2SAT 126.2} 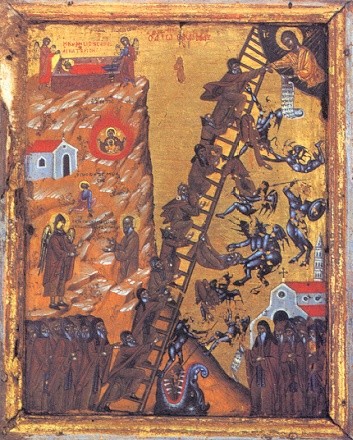 Interestingly, that sounds similar to the doctrine of Theosis, taught by the Eastern Orthodox Churches, and the Eastern Catholic Churches.  Western Catholicism doesn’t give it much attention as far as the use of the term divinisation goes, and the Eastern part carries it over from their Orthodox heritage.  If you see a difference between divinisation and deification, Theosis refers to the former … some people see a difference, some people consider them perfect synonyms.  See below – probably equivalent to the Protestant concept of sanctification.

The Christianity Today magazine, more than 10 years ago (I was in school), analysed the Theosis belief, and considered it to be acceptable in terms of Evangelical Protestantism. (Here is a more recent Christianity Today article on the topic.)  It compared it to the Mormon concepts of man becoming gods, and the Armstrongite concept of “we will become God as God is God” and called both of those heretical.

St. Athanasius of Alexandria wrote, “The Son of God became man, that we might become God.” His statement indicates the concept beautifully. What would otherwise seem absurd, that fallen, sinful man may become holy as God is holy, has been made possible through Jesus Christ, who is God incarnate. Naturally, the crucial Christian assertion, that God is One, sets an absolute limit on the meaning of theosis – it is not possible for any created being to become, ontologically, God, or even part of God.

… For many fathers, theosis goes beyond simply restoring people to their state before the Fall of Adam and Eve, teaching that because Christ united the human and divine natures in his person, it is now possible for someone to experience closer fellowship with God than Adam and Eve initially experienced in the Garden of Eden, and that people can become more like God than Adam and Eve were at that time. Some Orthodox theologians [and Catholic theologians: SK] go so far as to say that Jesus would have become incarnate for this reason alone, even if Adam and Eve had never sinned.

… It is, therefore, misleading to attribute to Eastern Orthodoxy a special insight into the possibility of union with God: from a western point of view, the theological difference between east and west is somewhat rhetorical. But there is also a slight difference in that what theosis actually means. In West there is a tendence to see theosis as mere union (purgation, illumination and union as model for deification), which is a half truth.

… Most Protestants do not believe in Christian perfection as Wesley described it and most Protestants also do not use the term theosis at all, though they may perhaps refer to a similar concept by the term sanctification.

The Wild Things of God is a nice site as well.  It has several links to Protestant and Catholic equivalent teachings … although the Wikipedia article mentions that Catholicism rejected Wesley’s idea of Christian Perfection, but didn’t reject Theosis.  If you try to get to the Methodist link, it won’t work, but it’s archived here.

Probably the best page is on the My Coptic Church site – there are several pages on Theosis.  Perhaps the most relevant is “What Theosis is not“

The intro of “What Theosis is not” says:

The Church Fathers distinguish between the nature or essence of God and His energies. The nature of God is both participable and unparticipable. It is participable in the uncreated energies but not in its essence. Thus, theosis is not participation in the divine essence. For if we could unite with God’s essence, as Vladimir Lossky states, we would cease to be creatures and God would be not a Trinity of Persons, but would have as many hypostases as there are persons participating in His essence. Thus, unity with God in theosis is not pantheism, which believes that everything is God.

St. Gregory Palamas delineates as follows between the essence of God and His energies: “God in His completeness deifies those who are worthy of this, by uniting Himself with them, not hypostatically – that belonged to Christ alone – not essentially, but through a small part of the uncreated energies … while yet being entirely present in each.”

Adventism must decide if it’s going to take the side of 7th-day Sabbatarians or Catholics on this one.