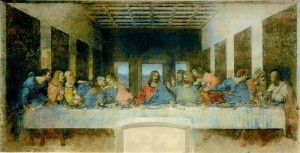 A post on the Fifth Column blog, Pagan Flesh, Protestant Bones, caught my attention the other day.

It suggests that Protestant anti-Catholic tendencies are what have resulted in the current attempt by secularists in America to wipe Christmas from the calendar.  They were the first to attack Christmas; the anti-Christians are just finishing what they started.  He has another article on that particular topic here – How the Christians Stole Christmas.

Similarly, the Da Vinci Code book/movie by Dan Brown is, in fact, a form of Protestant view of Christian history.  This is the main focus of this post.

The Da Vinci Code, it seems, has very little to do with Gnosticism.  Steve Kellmeyer has another fascinating article on this topic in an article on the Gospel of Judas (which IS a Gnostic text.)

Is this where Protestantism, at least some of it, is heading?