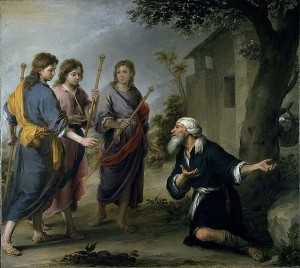 I often hear people criticising the use of the term “father” to describe Catholic priests, based on Matthew 23:1-12.

Matthew 23:1-12 KJV  Then spake Jesus to the multitude, and to his disciples,  (2)  Saying, The scribes and the Pharisees sit in Moses’ seat:  (3)  All therefore whatsoever they bid you observe, that observe and do; but do not ye after their works: for they say, and do not.  (4)  For they bind heavy burdens and grievous to be borne, and lay them on men’s shoulders; but they themselves will not move them with one of their fingers.  (5)  But all their works they do for to be seen of men: they make broad their phylacteries, and enlarge the borders of their garments,  (6)  And love the uppermost rooms at feasts, and the chief seats in the synagogues,  (7)  And greetings in the markets, and to be called of men, Rabbi, Rabbi.  [8]  But be not ye called Rabbi: for one is your Master, even Christ; and all ye are brethren.  (9)  And call no man your father upon the earth: for one is your Father, which is in heaven.  (10)  Neither be ye called masters: for one is your Master, even Christ.  (11)  But he that is greatest among you shall be your servant.  (12)  And whosoever shall exalt himself shall be abased; and he that shall humble himself shall be exalted.

If Jesus meant that nobody was to call anyone on earth “father”, and meant it in the sense of forbidding the word, then what of biological fathers?  No exception is made for them … and it remains a word, and name, by which they were/are called.

1 Cor 4:15 has Paul calling himself a father in a spiritual sense.

If Jesus forbade the use of the term “father” and if a question is asked in any particular instance, “was that man called a father?” then I don’t see how the answer can be “No” in any of these cases.  Which means that there are exceptions, or that it was not meant to prohibit a specific word, or that the writers of the New Testament were simply in error to use the term the way they did for Isaac, Abraham, et al.

The context of Jesus’ statement is pride.  It was pride that puffed these people up to hear themselves called “rabbi” or “teacher” or “master” or a spiritual father.  Addressing a teacher as “teacher” is not wrong … yet the passage forbids that too (the word “master” in the KJV is a guide or a teacher, according to Strong’s.)  So the term “doctor” (the Latin translation) would be equally wrong.  (We can exclude the medical doctor for the sake of argument, but not someone with a doctorate.)

If Jesus was referring to words not to be used, then they shouldn’t have been used elsewhere in the Bible, especially the New Testament period after he gave that prohibition.  If we can ever answer “Yes” to the question “was that man called a father?” then we have to either conclude that it is a case of disobedience to Jesus’ ruling, or we need to ask if it fits the description of the people Jesus was criticising – “do they use the title because it places them in a position of power, due to pride, or to be seen as important?”

Many non-Catholics might attribute the title “father” used by priests to imply such things.  They often think of Catholic priests as all-powerful dictators over their congregation, demanding authority and submission to their interpretation of anything and everything.  But that is not the case in actual Catholic theology, and in the experience of most Catholics, not at all the reason why priests use that title.  In Catholic theology, it gets used in the same sense as the Bible uses it for Paul and Abraham and Isaac, and in the sense of a spiritual leader acting as a father to his household, the congregation, as much subject to Christ as Paul and Abraham and Isaac were.  In a practical sense, it’s a convenient term to call a priest – especially one whose name you don’t know.  And by the time you know his name, it’s already what you’re calling him, so it sticks.  My father calls our bishop “George” and the nuns (and many others, but the nuns are usually the majority) at our church call the priest by his name.  Pride doesn’t come into the use of the term … and if a priest did take pride in it, it would be criticised by the Catholic Church just as it was by Christ.