In his latest Endtime Issues (#141,) Samuele Bacchiocchi again [see here] criticises the papal stand on moral issues, and the commitment of Catholics to the support of Catholic moral teaching.  It looks like moral strength is a sign of the end-time evil power.  Or so many Adventists would have us believe.

He also interprets HH Pope Benedict XVI’s promotion of Sunday in a sinister way – whereas in reality, the pope is merely promoting better devotion to God in a way that Bacchiocchi does not like.  Bacchiocchi has a history of such peculiar interpretations. [see here and here]

Bacchiocchi says of the ecumenical progress:

For example, Bishop Eero Huovinen of the Finnish Lutheran Church, told the Eucharistic Congress: “We Finnish Lutheran wish to be part of the Catholic Church.” He expressed agreement with the theme of the congress by affirming that “Lutheran cannot live without the sacrament of the Eucharist.”  He closed saying:  “From the bottom of my heart, I would like to anticipate the day in which Lutherans and Catholics, together, unite in a visible way.”

Bishop Huovinen’s statement is significant for two reasons. First, it shows that the Catholic promotion of Sunday as the day of the eucharistic celebration, serves as a rallying point for Christian unity under the leadership of the Catholic Church. Second, it reveals that the historical doctrinal differences that have divided Protestantism and Catholicism are largely ignored. Part of this development is due to the historic Joint Declaration on the Doctrine of Justification, which is an important agreement between Lutherans and Roman Catholics.

Ecumenism is about understanding each other instead of doing what is popular in many Adventist circles – feeding people incorrect information in order to promote disunity.

Creating a climate of respect and mutual acceptance is slowly, but surely, working.  The Adventist camp that promotes their traditional propaganda has decreased, and many now see Ellen White and her writings as flawed, affected by the anti-Catholic climate of their day, and no longer the absolute authority the more traditional Adventists of the past have seen them as.  The anti-Catholic propaganda has dwindled – because Adventists are starting to learn the truth about Catholicism.  The days where they blindly accepted their pastors’ claims that “Catholics worship Mary” and “the Pope claims to be God” and “the Pope changed the Sabbath to Sunday” are becoming history.  When Adventists find out what Catholicism really believes, and leave the propaganda behind them, they can’t but accept us Catholics as fellow Christians.  Bacchiocchi, in a way, whether wittingly or not, has helped this process.  Which is why the more conspiracy theorist part of the pro-division faction in Adventism sometimes label him as a Jesuit infiltrator.

Bacchiocchi bewails the fact that Protestants consider Catholics to be Christians.  Lately the question of whether to re-classify Adventism as a cult instead of a Christian denomination has been asked more and more often in Evangelical Protestant circles.  Is he just trying to put Catholicism in the same boat?

Worship through Mary, saints, objects, shrines, icons, crucifixes, or statues, is condemned by the Scripture as idolatry.

Maybe it is condemned in the Clear Word Bible, but not in the real thing.  Worship of false gods, yes.  Worship of false gods in the form of idols, yes.  The use of physical means for worship – no.  The Bible is full of evidence for shrines, sacramentals, statues permitted by God, and grace coming through physical objects.  Yes, even the New Testament contains this.  [here] [and here, archived here] Bacchiocchi is willing to make sweeping – and inaccurate – statements about what the Bible says in one place, without bothering to put real Catholic teaching and the Bible’s complete witness side by side and compare them.

Bacchiocchi’s problem with the Catholic way of experiencing the divine is not really what he says it is – after all, his own denomination does the same thing in other ways – the Sabbath, diet laws, Ellen White’s writings.  And at an Adventist service I attended, the congregation knelt in reverence when the Bible was raised for them to see before it was read.  Were they worshipping the Bible?  Were they allowing a visual, physical form of worship to distract them from the real worship of God?  Or is this a valid form of respect that can be paid to the Bible, and thereby instill respect for it in the hearts of those who believe it?

His section title to this section is “Revival of Marian Worship.”  He should really know better than to use terms like that – but it serves his purpose, which is to instill disapproval of Catholicism.  As I said before, ecumenism is about understanding, not about misinformation.  This, from Bacchiocchi, is about misinformation. 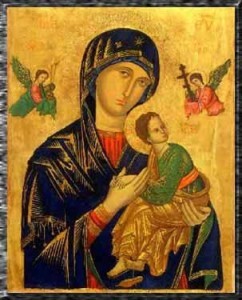 Catholics do not worship Mary.  To claim they do is as ridiculous as claiming that Adventists worship the Sabbath or Ellen White.

Yet, in a sense, they do.  The term “worship” is not restricted to the adoration due to God alone.  In many places in the world, judges and magistrates are called, “Your worship.”  Lovers are said to worship each other, or to worship the ground walked on by the ones they love.  In some contexts, the word “worship” refers to giving honour or respect.  This is perfectly acceptable in contexts outside of the adoration of God.  The Bible itself contains many such examples – applying to humans, as well as sacred objects.  Those who hold the anti-Catholic position either have not read these passages in the Bible, or simply dissociate them from the issue of Catholicism, and never make the logical connection between the two practices.

The problem is that, in our current language usage, the term “worship” has become a lot more restrictive, especially in a religious context.  When people today see the term “worship,” they associate it solely with the adoration due to God alone.  And this is exactly why Bacchiocchi’s use of the word is misleading.  Many Adventists believe that Catholics do indeed worship Mary in the way we worship God.  Bacchiocchi is playing to that misunderstanding.

Adventists, on the other hand, do give reverence to the Bible, to Ellen White, and to the Sabbath.  They can therefore be said to be worshipping these things.  But it needs to be pointed out that, in this context, the term “worship” is not being used in the strict modern Christian interpretation of the word.  What Adventists really engage in is a form of respect – not adoration of the divine.  That they reserve for God alone.  And the same is true of Catholics.

The Catholic “worship” of Mary and the saints, etc., is simply what the Bible shows is a legitimate form of honour.  It is not the same as our worship of God.  Just as in the Bible the externals may have resembled that worship of God, so today Adventists may see similarities – but they do not see what is in the hearts of Catholics, and, not understanding how Catholics experience their faith, assume they are the same type of worship.  The vast majority of Catholics, understanding that experience, can easily differentiate between the two, and know what they are worshipping and what they are merely paying respect to.

Those Catholics who don’t understand this can end up somewhat horrified by what they are doing, not realising that their actions are condemned by Catholic teaching, and assume that the idolatry they were guilty of is also what is going on in the hearts of other Catholics … and so they loudly proclaim that Catholics worship Mary, without really having understood what is really taught.  They end up in the same group as those who never manage to make the logical connection between Catholic practice and the biblical passages showing honour to non-divine entities.

So, just as Catholics give a biblically permissible form of respect to Mary, the saints, etc., so Adventists do the same with their traditional icons.  Does this mean that Adventists are engaging in idolatrous worship?  No.  It just means that, like Catholics, their hearts can and do know where the line between God and God-given is drawn.  It is through understanding of each other that prejudices (pre-judgements) like this are dissolved.  Bacchiocchi does not seem to have mutual understanding on his agenda.  In many ways, such as refuting Ellen White on the origins of Sunday observance, he has contributed to moving Adventism away from its roots and towards a more fact-based outlook on history – but, in this newsletter, he does not seem to have this in mind.