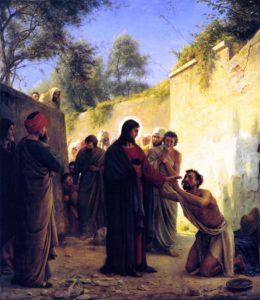 Healing of the Blind Man

Leviticus 19:14 [KJV] – Thou shalt not curse the deaf, nor put a stumblingblock before the blind, but shalt fear thy God: I am the Lord.

What do you think of the way people treated this blind man?

Immoral? No. Not at all.

Or at least that’s what some Adventists will tell you.

You see, Adventists often try to differentiate between a moral law, the 10 Commandments, and a ceremonial law, all of the rest.

Yes, when I’ve pushed Adventists on this issue, I’ve actually had them tell me that the biblical instruction above (not to put something in front of a blind man so that he falls over it) is a ceremonial law.

Which ceremony or ritual or cultic aspect of religion does it pertain to?

That said, I would think most thinking Adventists would ignore the logical conclusion of their “moral vs ceremonial” classification, and consider it morally wrong.