Catholics and the Bible 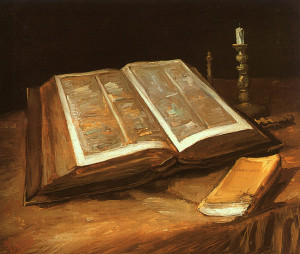 One of the comments on the original article says the following:

In my opinion it would be helpful if more protestants like myself were to attend a Catholic mass. I suspect they would find the whole experience quite revealing. Catholics do read the bible. Whereas most ‘Bible Believing’ non conformist churches have only one bible reading in a service the liturgy of the mass includes no less than three.

How incredibly true that it.  If only people would realise how Catholicism really views the Bible.  There are so many misconceptions out there.

Catholics, please repent. Worship him that saves, not the dead

That’s one of the misconceptions.  There are many degrees of meaning to a word, and fundamentalist Protestants, of whatever denomination, don’t recognise that – they restrict their language to the meaning they use.  Worship can also mean simply paying respect to someone, and the Bible has plenty of examples of this – conveniently ignored by those who want to complain about Catholicism.  We don’t worship Mary as we do God.  We honour her, much like they honour the Bible.  Prayer – it’s something that can be used as a form of worship; but it can also simply be a request.  Again, there are different degrees of meaning, and Catholics do not limit their use of the word to modern Protestant definitions.  The actual English word can mean a request, or to address someone.  Sometimes Catholic English and Protestant English use different definitions for the same words.  If people want to understand each other, that is am important factor to take into account.  You can’t judge a statement unless you know what was intended by it.