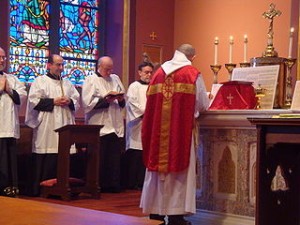 Tridentine Mass celebrated on Palm Sunday in the chapel of Cathedral of the Holy Cross in Boston. Photo by John Stephen Dwyer

For those who find the Mass somewhat strange, and wonder where on earth we got it from, the answer is short – it’s based on Jewish liturgies, importantly the Passover seder.

And here is a video from The Fourth Cup – Dr. Scott Hahn

Most of the Mass consists of prayers, readings of the Bible, a sermon, and most of the non-sermon section, prayers included, is taken mostly from the Bible. For a walk-through the Mass with the verses listed, see “Just what is the Mass anyway?” It’s an archived link, as I can’t find the original elsewhere.

Some books worth reading, via Amazon: