The biblical basis for relics 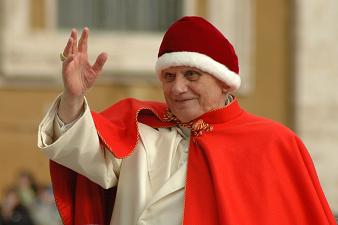 The German-born Pope delighted the crowds at his weekly audience by wearing a red velvet cap trimmed with white fur along with his scarlet cape as he drove around the square.

So says The Telegraph of Pope Benedict XVI who put on a Father Christmas / Santa Claus-like hat on a tour around St Peter’s Square.